Why should I worship such an obviously evil being? 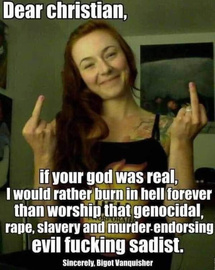 Flipping the bird at believers will help your cause how? 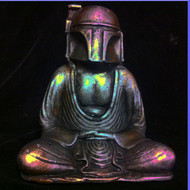 There are a variety of human behavior types pretty evenly distributed throughout all cultures. Usually a majority have the the configuration for religion of some kind to feel confident and effective in their lives. Whatever the reality of religion is, it is not going to go away and it is a fool's quest to think it ever will.

My Dad is a lying cheating asshole but I gave up on religion long before he was exposed. So no to your question.

@Azathoth I AM talking about the twit in the piccie. I thought that was obvious.

Religion is the low hanging fruit of ideological systems to critic. At the moment there are many equally worthy targets. Some of the more important absurd ideological systems in need of critic are critical race theory, intersectional theory, Marxism, crony scientism, cultish environmentalism, neo liberalism, and post industrialism.

Since the SAME God is worshiped by Jews and Muslims alike, I guess that makes an awful large pile of sadist worshipers, huh? Who said you have to believe anything Christians do? Is there a gun to your head?

Actually quite a few people have told me I should believe. But yes nobody is holding a gun to my head.

Can you explain the information here describing your God suggesting that your God is hypocritical?

Someone trained in the art of deception has many tactics to employ when the goal is to deceive and the means to reach that goal is deception.

One tactic is called a Man of Straw.

If someone is not employing this tactic, and instead the stupid person with the stupid ideas is honest, then any number of people can expose the stupid ideas during careful, honest, and deliberately accurate exchanges of words with shared meanings.

The God of the bible endorses Genocide, Rape, Slavery and Invest to name but a few. He is completely despicable. It's all there in the pages I'm not making anything up.

How many Bible Copies are there?

How many Bible Copies are authorized?

How many authorities capable of authorizing how many Bible Copies are there?

How many opinions are there?

"The deliberate modification of English to being not only a commercial language but the primary language of occult knowledge and usage was confirmed by the massive undertaking in the creation of the “Authorized Version” of the Bible also known as the King James Version and the KJB or KJV. A further one thousand (1,000) words were introduced into the English language out of approximately eight thousand (8,000) word forms used in the text. Most significantly, the use of the Persian word God / Gad as the public name for Sabaoth, also known as Satan was introduced to replace Yehovah (YHVH) of the Catholic Church since the 8th Century as the primary deity worshipped, making the Church of England the reformed Aryan (Persian) religion of Menes, later known as Judaism." Frank O'Collins

Here is another opinion:

"All national institutions of churches, whether Jewish, Christian or Turkish, appear to me no other than human inventions, set up to terrify and enslave mankind, and monopolize power and profit." Thomas Paine

"The God of the bible endorses Genocide, Rape, Slavery and Invest to name but a few. He is completely despicable. It's all there in the pages I'm not making anything up."

Someone, or some fictional or real entity not human (inhuman?) who endorses things done to others that this ONE in question would defend against if that were done to that ONE, is - by law - a criminal.

This ONE endorses (a crime, fill in the blank) on other people, while this ONE would fight tooth and nail to defend against having that done to this ONE.

Where did I get that working definition of Law from?

What if The Bible (TM) was a collection of fake messages mixed with factual accounts from a Man of Straw?

You can include a link to this post in your posts and comments by including the text q:239729
Slug does not evaluate or guarantee the accuracy of any content. Read full disclaimer.