We rely on members to let us know when posts contain content that violiate the community guidelines. The most common reason that content gets flagged is that it contains dehumanizing or trolling/baiting text. Getting too many flagged posts will result in account termination.
Visit Group Join Group
0 0

I was banished (for speaking the truth to power) from Culture War (IDW topics) and occasionally I am presented with posts in my feed that lead to that exclusive group, so I can't enter, and a I can't get things that look important to me, such as a recent photo/meme.

I found it elsewhere and I will re-post it, thanks to the original one who posted it in the exclusive forum that I was nearly tarred and feathered within.

I'd like to comment too, on the photo/slogan/meme "A black Supreme Court Just-us JUST swore in a female Supreme Court JUST US. And the only people who are unhappy about it are democrats.

My comment is to second the message (to give it credit for value) offered when the criminals created the JUST US SYSTEM of Subsidized Slavery, doing so in 1789.

"The judiciary of the United States is so constructed and extended, as to absorb and destroy the judiciaries of the several states; thereby rendering laws as tedious, intricate, and expensive, and justice as unattainable by a great part of the community, as in England; and enabling the rich to oppress and ruin the poor."
George Mason, 1787

Those who are happy about it are typically those who profit from it. Those not, unless suffering some form of collective Stockholm Syndrome are not so... 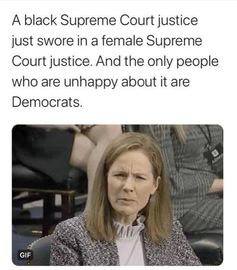