American, Protector of the Realm. Once upon a time America courageously opposed evil in the world.

Biden destroyed America's legacy as Protector of the Realm. He will cripple
American strength to the point where we will be unable to help the world.

Trump: We're going to win so much, you'll get tired of winning.

Lombardi: Winning isn't every thing. It's the only thing.

The left doesn't like to win. I miss winning. 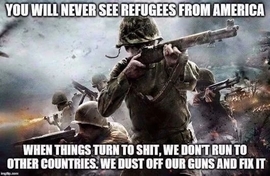 If Biden keeps as many of his promises as TRUMP did in his first four years, you well may see REFUGEES from the USA!!!!
I may be one!!!!

The only one on your list that I have a problem with is the Spanish American War. America overran the Republic of the Phillipine Islands after helping them be independent for 3 or 4 years. We gave Cuba back, because at the time, it was a concern of having an offshore state in the Union. Takes a lot of digging to get into the quagmire of the politicking involved.

There was a US military police action in the 1950s in Morocco .

Libya and Kadafi were trying to get off the world globalist system, on the gold standard, had all sorts of achievements in culture & society. Tried to create the greater Africa Union. There was even pictures of the advancements of agriculture in Libya in the National Geographic magazine. I am not so sure he was the boogeyman that the powers that be portrayed him as.

Overall though, I love the post and the meme.

Gadaffi was granted a 15 minute speech to the General Assembly of the United Nations, a great honor. Alas, he overdid it by speaking for 90 minutes.

Qadaffi held power over Libya for 34 years. Not easy to do.

Hillary screwed it up. Things were going well in Libya before Hillary, and went poorly after.
Poor nation building. Hillary was one of the worst Secretaries of State of all time.

@jaymaron I believe his personal bodyguard were all women, they could be trusted. He also gave women equal rights and footings, I thought.

Subsidized and gave land to people who just wanted to farm.

Send sick people out of country to get the best medical attention, if they could not do it themselves.

He was humanitarian is some aspects, quite liberal for the stereotypical dominating muslim man.

Thank you for your comments and insights.

America built itself into a great nation, and America is also a great nation-builder of other
nations. America manufactures greatness and exports it.

Japan
The South after the Civil War
Texas (Became a state)
American Samoa (Source of football players)
Cuba (Was doing well before Castro)
Kosovo War: Croatia, Kosovo, and Bosnia-Herzegovina were liberated from Yugoslavia.

@jaymaron Yes! The Texas one is a real good one too. Look at their contract to join the Union, and they exercised a clause when they joined the Confederacy. But I am more referring to the legal ability to break up into 5 pre-approved states. 10 senators, ect. It would reshape the House of Representatives 'disturbation' for sure. Also brings to mind the state of Jefferson ( Northern Cali and Southern Oregon). Excellent thread my friend excellent.

Posted by EdgeworkKeeping the priorities straight

Posted by EdgeworkOops... how quickly reality changes for some people

Posted by WilliamRidleyIs this the new androgynous strain of the virus?

Posted by Krunoslav The Podcast of the Lotus Eaters 79: Published March 3, 2021 Rumble — Carl and Callum discuss Twitch's failed attempt at helping womxn, Gab under attack by the minions of Satan, and CNN reveals ...

Posted by RaithRoguestarBecause they know you'll buy a gun and ammo and shoot your eye out.

Posted by WilliamRidleyVEEP is getting ready ...