Warfare? Why do humans constantly engage in this barbaric action?
I would really like to know. What is it that compels Us?
I recently wrote about Julian Assange and Wikileaks. I put My belief forward that the truths exposed by Wikileaks were a good thing. The secrets exposed showed war in it's ugliest form. If these were no longer hidden from view then wars would would be far harder to start.
Weapons of mass destruction. The invasion of Iraq would not have happened without this deception.
The six day Arab Israeli war? Why was the USS Liberty attacked?
The list is long. So secrets and war, do We just continue? Is war just part of human culture and may be changed or just Us.

Partisan politics,  is a dangerous and counterproductive endeavor.
Our Two party system, never worked well, but media has rendered it obsolete.
When national priorities are played out and  debated online, by the masses,  nothing is accomplished beyond division and chaos. 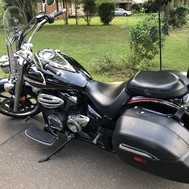 The public is uninformed, and that's the power I would remove from those who use war as a tool to gain power. An informed public is the only circuit breaker for this endless warfare.
The oil wars are just about done. The next will be water. Then something else.
The powerful have always used war to gain their ends but that changed after the "Trinity" test 1945 Now war can lead to extinction and you can add biological, nanotechnology, and chemical to the ways we may end ourselves.

Governments are the problem. It’s NEVER the people.
We just pay for their wars. We never have anything to do with them, no “skin in there game”.
I Will always believe that the Vietnam war was fought so they military industrial complex could sell bombs and bullets. This is a fairly intelligent forum, why couldn’t we come up with a solution ?
We need a way to make sure that the oligarchy isn’t running their own version of organized crime.

I believe we need to move from a Representative format, which is deeply corruptable and unaccountable to a Participative Republic where the everyday citizens are required to participate in some aspect of governing in the regions where they live. Each individual spends time around areas of interest, expertise and it is an open to the public debate and discussion and the audience votes a panel that decides how to proceed, that panel is done when the decision is made. I think with something like a blockchain recording of every decision and contract, and panels made up of minted members then we can begin to force out special interests with deep pockets and selfserving politicians. And no Parties the choose between.

I totally agree about Assange and this is just MHO but I'm feeling that 99% of the population is not ready for a kind loving world. They are still to EGO based, selfish, brainwashed to see what some of us see. It's a good article.

Because people have a mean streak a mile wide and a mile deep.

WikiLeaks was about to expose 9/11 as an inside job