Where the Fed got the original idea from... 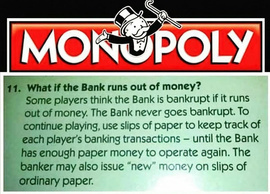 So you are anti-Capitalism then?

If a player runs out of money he's out of the game. Not so for the bank.

Sir Isaac Newton understood that a nation's strength rests in its currency. When Newton was Master of the Mint, he engineered things so that the world's gold flowed to England, so that there was plenty of gold for currency. You can't get stuff done without a credible currency.

So, it’s true! The elite see the world as one gigantic board game! Suddenly, the entire clownish system makes complete sense!