Oh this is embarrassing. [washingtonpost.com] 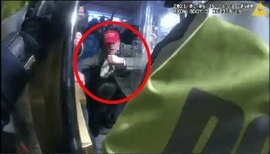 Instead of going through all the mental gymnastics necessary to support the Democrats narrative why don't we call them what they were, mostly peaceful protesters who rioted.

BTW if you want to get technical anyone who promotes communism without advocating for a constitutional convention is engaging in treason.

I would like a constitutional convention. Regardless, we can make judgements of value outside liberal legal frameworks.

That's the position kings and popes used to justify their own lawlessness.

During the summer of riots there were plenty of Democrat staffers involved in violent anti police riots and arson, high level Democrats seemed to encourage it, so I'm not sure how this is embarrassing, the whole point of the Jan 6th farce is to try and prove Trump was responsible for the illegal acts by individuals, if you saw or read his speech or even Alex Jone's speech at the capital that day there was zero incitement.

If you watch the videos from the day there were a few bad actors but calling it an insurrection is frankly silly, and the listening to the Democrats like AOC claiming she feared she would be raped and murdered is comic book fantasy. I suspect most conservative Americans encourage justice be served to those who broke the law, but in proportion to the crime not the politics of the accusers.

If you want to talk to incitement; for months leading up to the election Democrat leaders told known lies with the clear purpose of promoting racial tensions and violence in the streets and perhaps billions in damages. That was a purposeful coordinated propaganda campaign which was far more serious and damaging to the US than the Jan 6th antics.

Beating on police! Wow! Glad to see they are your friends now, Wily. Was Chief Dorn's murderer ever caught? Maybe. Haven't heard. But Kamala Harris or someone would probably just let him out the back door anyway. Just like Kim Gardner is letting murderers off the hook in Missouri.

"The ideal subject of Totalitarianism is not the convinced Nazi or the convinced communist. It is people that can't tell fact from fiction or right from wrong." - Hannah Arendt

It is simply wrong to try and "Make Racism Great Again".

Got anything of substance to say?

@WilyRickWiles Bwahahahaha..... Did I mention a great fact or a great fiction? Amazing you can't tell the difference. Thanks to Hannah Arendt for that brilliant insight into the ideal totalitarian subject.

@FrankZeleniuk This isn't about me or you or any of us individually.

@FrankZeleniuk The subject--explains why you are having so much trouble staying on it.

@WilyRickWiles The "subject", in the context of the the quote I cited, means the "individual under authority or control". In light of that, your reply is nonsensical.

I will ask again, one last time. What is "this"?

@FrankZeleniuk The subject is the OP.

@WilyRickWiles Okay. As usual something non-sequitor. The "subject" has a lot to do with us individually. It contributes to your pet project; "making racism great again", the direction of society and the existence of western civilization.

The quote I provided from Hannah Arendt is quite pertinent to what is going on and this "subject". In the zealotry of the Democrats inhibits their ability to determine fact from fiction or right from wrong.
Your zealotry in "making Racism greatt again" precludes you from acknowledging the destruction to individual lives that is occurring from the actions of the Democrats and their inability to tell right from wrong. All the death and destruction is a good thing, in your view. "Let's tear this baby down" is all that is of concern to you. You are the epitome of the ideal subject of totalitarianism the ones that followed the great communist/socialist and Nazi/socialist zealots of recent history.

@WilyRickWiles Whatever, Rick. You may not see my point as pertinent to the OP but it is. It could be willful ignorance on your part, lack of comprehension or just a further denial of reality. - making you the ideal subject of totalitarianism.

Thanks for confirming that once again.

@FrankZeleniuk It is sad that riffing seems to pass for commentary around here. Everyone fancies themselves a mini Trump.

@WilyRickWiles Yes. It is. Ever had an original thought of your own?

@FrankZeleniuk You basically just said "I know you are but what am I?"