The Wages of Hatred…

Noah Lyles is an Olympic hero, and may be the world’s fastest man; but the elite athlete has a history of depression and believes America is “trying to kill” him.

Lyles, young, black, celebrated, is a textbook case of how woke-leftist propaganda — on the pretext of helping minorities — is achieving the opposite.

“You’re hearing on the news everyday that you’re not wanted,” says the young man so blessed with talent, status, and the privilege that comes with it. Yet, day in, day out, the news media tells young minority kids that the rest of America hates them. Lyles has been raised on a diet of these falsehoods since his birth in 1997.

The fact that he’s a patriot exacerbates the dilemma. “As an athlete who is trying to get to the Olympics, representing the US, you know you love your country”, says Lyles. “It hurts even more to see the country you love is trying to kill you.”

The truth is, America wants to celebrate Lyles and people like him, not kill them. But the daily diet of falsehoods and conspiracy pumped out by the culture is damaging generations of minority kids, filling them with anger, dread and hatred. It’s also impacting their mental health and well being.

How else could this young man, who lived under a black Presidency for a full one-third of his life, and been accepted at the highest levels of sports and culture, feel like his fellow Americans want him dead? 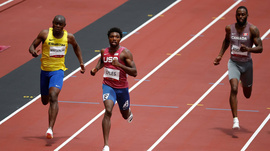 Media, corporations, and academia working overtime to encourage blacks to be basket cases (Simone Biles too, of course).

the state of having inconsistent thoughts, beliefs, or attitudes, especially as relating to behavioral decisions and attitude change.

This is what he is experiencing. On one side he has been subjected to the constant drum beat of the leftist narrative that USA is implicitly and explicitly racist. On the other side all of his senses - his mind - tell him that this is not true.
Like so many other Black Americans he is sadly/tragically confused - he is a living example of "cognitive dissonance".

I have found that psychologists are egregiously unable to handle cognitive dissonance. If someone disagrees with a psychologist, the psychologist says that he has mental disorders.

Psychologists have a theoretical framework that is unrigorous, unquantitative, and incomplete. It's furthermore wrong. If someone disagrees with this framework, psychologists freak out.

Democrats and Republicans are dissonant. A wuss plugs his ears in the presence of dissonance. A badass opens his ears and looks for an opportunity to unify the two styles of thought. This is where the glory is.

Decades ago, athletes that whined like Lyles were shamed and their fellow athletes would institute an "attitude adjustment" upon him. Today, whining athletes are praised.

Lyles got where he is because he had help, and he's in denial of it. Ask Lyles: "Now that you've made it, what can you do to help others?"

@jaymaron Thanks for that perspective. The final question really nails it it terms of both gratitude and personal responsibility, both of which are in short supply these days. I’ve encountered many people who are happy to talk endlessly about their issues and challenges, but become uneasy and irritated when asked, “how do you plan to handle that?” The hard left has been very clever in entrenching the false idea that such questions amount to “blaming the victim.”

@GeeMac aint that the truth!

Rapinoe has made it. Is she doing anything to help raise the next generation of soccer players?

Rodney Dangerfield is widely respected among comedians, because once he made it, he worked hard to help other comedians make it.

@jaymaron I will always believe that there was an underlying reason for the aggressive prosecution and imprisonment of Bill Cosby for "crimes" committed 30 or so years ago. Cosby openly rejected the Black victimization narrative. He encouraged Black people - young Blacks in particular to take personal responsibility - to be pro-active and to pursue education. I believe Cosby offered financial aid to Black kids who graduated HS (I could be mistaken about that though).
In short, I believe Cosby was openly and tacitly acting against that narrative. Given his high profile - the fact that he was beloved by Whites as well as many Blacks he had to be punished for straying afield of the proverbial plantation.
Cosby tried to use his wealth and influence to help other Blacks to become self sufficient and that was intolerable to the leftist movement. They punished him severely for it.

Cosby is in the top tier of comedians, and he furthermore has a special power. He can do clean comedy, comedy that's fit for kids.

When I was a kid, I remember feeling positivity from Cosby's shows.

America can't deny it. Cosby inspired many of of us when we were kids. Cosby helped raise today's generation of Americans. And he did it with clean comedy.

Today, Baltimore is anti-education. Few kids in Baltimore have a GPA above 0.1

Cosby had legit skills, and everyone has an opportunity to learn from him. Modern Democrats hate skill.

A mischievous Republican could bankroll a statue of Cosby and proudly display it. Cosby is all-American.

The progress that King and Cosby worked for has been thrown away.

@iThink Whether people feel Cosby is completely innocent or 100% guilty, you are absolutely correct. Cosby was finished when he started to criticize young men with their pants hanging off their asses. He began to tell black communities to start acting with pride and take responsibility for their neighbourhoods. That painted a massive target on his back. The whispering about Cosby’s past became louder, until Hannibal Buress started making jokes about it onstage.

Had Cosby embraced woke progressives causes, I believe he would never have been called out.

Posted by Sensrhim4hizvewz So many people who are meek and easy with their freedoms. How "free" are we??

Posted by GeeMacBob Woodward: Woke US General Conspired With Beijing How would you feel about a US Four Star General who promised the Chinese he would warn them in advance of an American attack?

Posted by 2perosWhy Is That??

Posted by 2perosMy Body, My Choice…

Posted by 2perosWhy Can’t They??

Posted by JohnHoukBeijing Biden Jab Mandate a Homeland Attack SUMMARY: … This September 11, 2021 is one day among many that history might mark beginning November 3, 2020 and more than likely ongoing as long as ...

Posted by KrunoslavIn George Orwell's dystopian classic 1984, doublethink is the act of holding, simultaneously, two opposite, individually exclusive ideas or opinions and believing in both simultaneously and ...

Posted by KrunoslavIn George Orwell's dystopian classic 1984, doublethink is the act of holding, simultaneously, two opposite, individually exclusive ideas or opinions and believing in both simultaneously and ...

Posted by DesireNoDesires> Such teams of highly trained professionals have several main objectives, such as “to inject all sorts of false material onto the internet” and “to use social sciences and other techniques to ...

Posted by WeltansichtDavid Sawyer July 4, 2020 The guy in the apron is my great great grandfather. He owed a grocery store in Vevay, Indiana. The gorgeous lady on the right?