The guy in the apron is my great great grandfather. He owed a grocery store in Vevay, Indiana. The gorgeous lady on the right? Aunt Jemima herself! All the other people around? They were there to meet Aunt Jemima and eat her delicious pancakes! So, tell me again why we are erasing her from her brand? Like she never existed! Like, she didn't get crowds like this at ever grocery store she visited!? I hate this for her legacy. Its obvious from this picture that lots of people loved her, wanted to meet her, and wanted to eat and enjoy her cooking. So so sad. 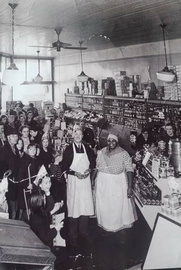 Her great-grandson was angry and saddened, too.

Found this little nugget too

Did Aunt Jemima and Mrs. Butterworth ever engage in illicit relationships? A marriage as sweet as syrup on a pancake!!!! Of course, times were different so it would be marriage in name only since legal betrothal for two bulbous broads, even skinny pretty gals, was definitely illegal. 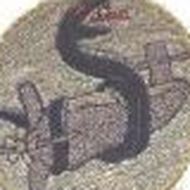 It's funny you should ask this question, because I just commented a few hours ago something I read about Aunt Jemima: an op-ed from NBC that basically said that symbols like Aunt Jemima, Uncle Ben, and Mrs. Butterworth deserve to be canceled because they allow white Americans to indulge in the fantasy of happy, compliant, enslaved blacks.

So by that logic, any black person who loves their job working for a company that is either owned by a white person or interacts with white customers is a racially-charged symbol, because black people should never be happy "serving" white people.

Smiles all around. We remember Aunt Jemima.

Posted by Sensrhim4hizvewzThe CDC, WHO, NHS and at least one journal of medicine are all involved!

Posted by Krunoslav"Brownshirts" in Germany and France.

Posted by RemiDallaireUNT stand for

Posted by RemiDallaireWhat they say ?

Posted by BartlebyTDVMLB's thug problem (not enough of them) | Bartleby TDV

Posted by Daveclark5Get this straight; I am not vaccine-hesitant.

Posted by WorldSighThe 100 covid cases aboard a ship with a 100% vaccinated crew is likely because of the unvaccinated… Right, @WayneHawthorne?

Posted by WorldSighCongratulations to all of the strong and ambitious women of IDW/Slug!

Posted by KeVinceIt would only take minutes per day