Once upon a time, most Americans had manners. Today, Democrats lack manners. Republicans can virtue signal that they have manners.

In Boston, in 1722, a set of letters were published by Mrs. Silence Dogood, and they went viral. The opinions in the letters gained broad support. Mrs. Dogood herself kept her identity secret. Mrs. Dogood is her pen name. In spite of the fact that no one knew what she looked like, many men publicly offered to marry her.

Turns out that the letters were written by Benjamin. Benjamin had proposed to James some material to publish, and James rejected it. James rejected all of Benjamin's proposed material. James censored Benjamin.

You can't censor Benjamin. Benjamin responded by writing the Dogood letters and placing them anonymously under James' doorstep. James published them because they got great ratings.

Trump is a master writer. He wrote a show that got great ratings, and it got him a star on the Hollywood Walk of Fame. Democrats can't do that. Democrat hate for Trump is rooted in jealousy.

Without Trump, no one would watch CNN. CNN should kiss Trump's ass. 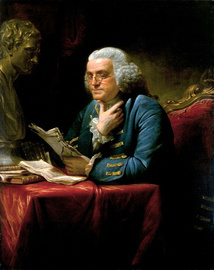 Once upon a time, it was impolite to bring up politics at a party. Today, Democrats are incapable of socializing without bringing up politics. Then they have the bad manners to dehumanize Republicans.

Funny, didn't take much thinking at the beginning of this posting to know Ben Franklin was Mrs. Dogood even before the brother's censorship was stated. Yay for one of my favorite souls of that era. I rather miss Emily Post for just this reason.

As to Trump, he intentionally speaks in the basic terms and cadence of "Joe Schnook" because that is precisely who he represents. Ask Churchill about fancy language. Yes, he was a master of it, but his deepest form of communication was to the common man in what at that time was the common man's language. Eloquence is lovely to hear but rarely is hard hitting. Do you want praise for your eloquence or are you seeking action?

"Trump is a master writer" is that why he can't spell or form a coherent thought?

It all depends on the objective does it not?

I worked for lawyers who couldn't spell worth a damn but knew the law inside out. My job was to take their thoughts and spoken words and quietly fix the written results. It's called support staff.