Republicans basically saying "we don't like it when the FBI goes after corrupt politicians and organized crime--but what if they were literally Female Body Inspectors?" 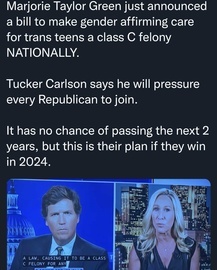 Fitness is measured in reproductive success.

That is of course complicated by kin, group, and societal selection. As far as we know kin selection is the weakest of the three but still seems plausible.

What seems to be happening is a denial that society should have any say in sexual behavior. That is fundamentally at odds with physical reality. A society of humans will not survive anymore than an insect society without well organized reproduction. By well organized I don't mean under some authority such as a government but according to instinct and mores.

Physical reality of course is not the only consideration. Culture is fundamentally to human evolution and is in origin abstract. Abstract culture was the driving force behind human physical evolution. We don't have culture because we have large brains but culture allowed the evolution of large brains. Culture has even created a form of artificial eusociality we call civilization. Because of this civilization has played a role in fitness.

Unsurprisingly considering the nature of cultural evolution mores have considerable irrational aspects. Not as random perhaps as physical evolution but certainly not entirely by design.

Mores have a fitness test and while they are not directly tied to reproduction high fitness mores have a role in genetic replacement. For example gene replacement in ethnic Mongolian by Han Chinese genes. Mores survive as much by adaptation as design.

Consciously or otherwise people have recognized the role of mores in cultural fitness. Historically those mores that are successful have often been embodied at least to some extent in organized religion. Other means of mores transmission are laws and ethical standards. Which are important to cultural fitness is not as simple as ideologues propose.

The role that individual rights play in cultural fitness is a complex topic. Perhaps to be discussed later.

I think what we're facing is Success-of-the-moment which allows more room for problematic possibilities.

In another time and place, Society (cultures) could not absorb the vagaries of gender identity. Even as Greece and Rome accepted (and sometimes promoted) homosexuality, neither would
say that a man was not a man or a woman a woman. Hermaphrodites were in a class by themselves and no one said otherwise. Rare though they are, they are what they are as well.

The bill will not become law. IF it were to, it would be rejected by the SCOTUS. I would certainly believe.

The people pushing this abomination lack KNOWLEDGE and understanding of Gender Identity disorders. I am NOT saying that there hasn't been a SERIOUS abdication by the medical community of their responsibilities and a MONSTROUS destruction unleashed upon teens - lots of people have to answer to the problems. BUT, kids are suffering. No, I am not talking about those under 10 or 11 - puberty is the issue. Prior to that, SOCIAL transition MIGHT be appropriate with well vetting therapists providing some guidance. Right now, the therapist community (and the greater medical community) is awash in woke medical malpractice.

Banning trans health care is CUTTING THE LEGS OFF SOMEONE BECAUSE THEY ARE BRUISED.

Those that support Taylor-Greene are ignorant. DANGEROUSLY ignorant.

Thank you for responding in good faith.

Been giving this some thought.

Point being, kids need protection, even from themselves sometimes.

Have you considered reading some research on the subject? Sounds like your knowledge is limited and you're conflating unrelated things in order to coerce other people.

@WilyRickWiles The research isn't promising. Dysphoria of any type should be appreciated for what it is.

The research overwhelmingly shows that children experiencing, not dysphoria but confusion or curiosity, resolve the issue before or at the onset of adulthood with no regrets. Dysphoria is being over diagnosed by factors. It s following the same contagious pattern as did anorexia in the 80's.
Both manifestations of contagion thrive on attention. Genuine sexual dysphoria is exceedingly rare, and it takes a person of years to make any type of reasoned assessment, coupled w/ professional counseling. Even in that context, gender dysphoria is as likely to be ameliorated through therapy, therapy which has come under attack as "normal" has lost so much of its meaning.

It's unfair and abusive to require a pat answer from children regarding a question fundamental to their existence such as their sexuality. "I just know" isn't a basis to begin life altering procedures
on persons innocent of broad experience.

We have no business castrating, neutering or otherwise altering children. They need to unfold. They need to grow. Stultifying that growth is abuse of the worst order.

Puberty is the rush. And it is not your right to force medical treatment on others or otherwise bar them from getting treatment they choose. Moreover, this impacts the care of adults as well.

Just let the wound fester and then cut the whole limb off. They can still survive.....

The difference is child and adult. Your stance on allowing children to be abused and mutilated, without their full and complete comprehension of the serious ramifications, is the same characteristic found in people who have low trust in society and a need for violence and chaos over peace and love.

Moreover, cutting off your dooflinky, slicing off your boobs, and filling your bloodstream with puberty blockers does NOT change your sex. It is Satanic! A boy is still a boy genetically and a girl is still a girl genetically.

I pray for you

@Sensrhim4hizvewz I wonder what your stance is on sending children, without their full and complete comprehension, to conversion therapy camps to yell at them that they are specific way and beating them or giving them drugs? Or your stance on forcing these confused children to go through 9 months of pregnancy and give birth? Or telling these confused children that they must be a specific religion and that only XYZ is true, based on your own belief, and that any deviation will result in eternal punishment and they must get baptized and and go to a specific building once a week and maybe be forced to wear a specific garment or get a circumcision and tell all of their innermost thoughts to some creepy old man in a robe in secret?

No child should be forced to be a member of any religious order. The mere fact that a child is brought up within a specific religious affiliation does not constitute an abuse of such child's rights. The family authority will provide the religious influence to children in most cases and in most cases, this is done with the greatest and loving intentions. Government kills MANY more people than religion does. Governments start wars. Governments use religions to start wars. A decent religion knows the distinction between God and Gubbermunt

@Sensrhim4hizvewz so you are pro-choice. Good to hear.

I can better be identified as someone who believes in, and is led by common sense based choice.

Ultimately, it is the woman's choice whether to carry to term or not, HOWEVER, it is not the woman's choice to use abortion as her preferred method of birth control when several other proven methods exist. The only reason abortion clinics operate over the precedence and under the ignorance of other birth control methods is financial gain. Fetus parts are a billion dollar industry!

You are seriously not comparing baptism to hysterectomies or vaginal construction using a penis are you??

The right approach is to put tranimals in psychiatric hospitals.