"Im a 17 year old girl with a flat chest, a deep voice, a visible Adam’s apple and some facial hair. There’s no reason for me to continue to live."

A girl who was bullied for being a tomboy was brainwashed by transgender propaganda and began "transitioning" at age 14. She realized that she had made a terrible mistake at age 17, a few months after doctors cut off her breasts.

She says that had some mental health and body issues that could have been resolved with counseling.

"I feel like a girl and wanting to be a boy was just me wanting to be accepted. I didn’t want people to make fun of me anymore. Now I’m 17 and I’ve thrown away my whole life. [...] I’m mentally completely destroyed."

All of her most recent reddit posts are about suicide:

"no one can help me. The people who did this to me they don’t care and they continue to do this to other children." 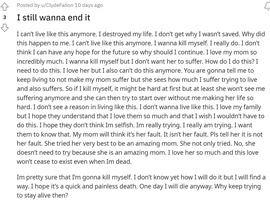 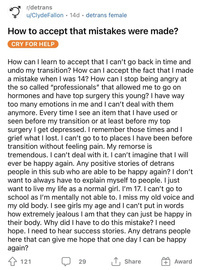 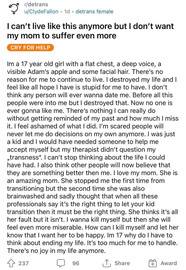 The whole transgender industry is about money. They make more money butchering these poor children than they would in giving them the psychological counseling they so badly need. 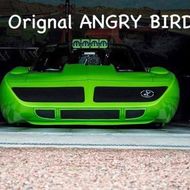 I agree that money is a big motivator, but there is also a ideological drive too. Which one is more of a driver is hard to say. We know that eugenics have been on the menu in the US since the first progressive era at the end of the 19th century. Its what Nazi ultimately adopted and expanded on.

We know technocray.inc was already operating in the 1930s in America and Canada and my suspicion is that their transhumanism is what protects "transgenderism". For the elites, it is the transhumanism they are after. And ideology of blending men and machines along with digital technology and genetic engineering to "free" humans from their body prison and make them more than humans. A new species. Trans-human. They even dram of immortality by uploading everyone’s brains to "global brain," a Borg-like concept of networked computers.

Nevermind the insanity of this and the limits of it, the elites behind it are the ones protecting the crazy transgenderism is what I suspect, because they need to normalize the idea of human beings being obsolete and trapped in their bodies. I think once they saw the transgenderism took off, they protected it and promoted it as useful idiots that will create conditions where transhumanism is the norm.

Biodiversity: The Genetic Takeover of All Living Things
Posted by: Patrick Wood February 24, 2022

The World Economic Forum’s self-declared "Great Reset" has two aspects: first is the radical economic transformation promoted as Sustainable Development, aka technocracy; second is the radical transformation of all living things, including humans, aka Transhumanism. The WEF’s own website speaks plainly about both.

The fact that many "elites" are pedophiles and degenerates also plays a factor.

There is no doubt money in all this. Even to the point that once they butcher a child they make it dependent on drugs and hormones for the rest of the life. A perpetual drug junkie for the big pharma.

But these kinds of things existed before, they were never done in this way I think because the culture was not at such a degenerate point where this would ever be so wide spread. Way too many people accept this insanity.

And the fact that way too many women under feminism were brainwashed into this crap and married the state, it made it possible.

Roger Scruton made a key observation, which is that feminist understood, they cannot win in direct competition with men, so in a sneaky way they saw opportunity in hijacking the language of the society and turning it into a political weapon.

"As far back as 1949 the seminal feminist thinker Simone de Beauvoir made this programmatic recommendation: “Language is inherited from a masculine society and contains many male prejudices . . . Women simply have to steal the instrument; they don’t have to break it or try a priori to make it something totally different. Steal it and use it for their own good” (1972, p. 123)."

And indeed they tried to do this with sex and gender. "During the 1970s American feminists seized on the idea of gender as a social construct, and used it to hide the truth about sex as a biological destiny. By replacing the word “sex” with the word “gender” they imagined that they could achieve at a stroke what their ideology required of them – to rescue sex from biology and to recast it as a complex social choice." (December 2002/January 2003, p. 1)

This led to the creation of a monster. Trans movement which now is the enemy of the very same feminists that created it. And that, ladies and gentlemen, is the danger of letting politically ambitious people play with language. I mean, what could possibly go wrong?

Furthermore, others with money interests and other ideas jumped on this train as well.

Eg. The Grayzone: The Woke Imperium: the confluence between neoconservatism and social justice

Jul 12, 2022 Christopher Mott of the Institute for Peace and Diplomacy joins Max Blumenthal to discuss his provocative white paper on the Woke Imperium. According to Mott, "The rise of a ‘woke’ activist-driven, social justice-oriented politics—particularly among the members of academia, media, and the professional managerial class—has provided the latest ideological justification for interventionism, and it has become readily adopted by the U.S. foreign policy establishment."

The primacist, interventionist wing of the United States foreign policy establishment—’the Blob’—has a long history of using prevailing moralist trends to serve as ideological justifications for expansionist and hawkish policies. From Presidents William McKinley and Woodrow Wilson on through the militant democracy promotion of the George W. Bush administration, this process often mutated to accommodate the de jour proclivities and entrenched biases of the policy-making class. The newest iteration of this process is the adoption of social justice causes and rhetoric as the explicit goals of the United States’ foreign policy. Such use and weaponization of the language of justice to advance the foreign policy objectives of the liberal Atlanticist Blob is particularly evident against regions and countries the West believes actively challenge the Liberal International Order (LIO) status quo or where it seeks to justify military and economic interventions on normative grounds.

Rather than a coordinated conspiracy directed from a central organization or even a conscious desire on the part of the participants however, this process of adopting, incorporating, and cultivating new rationales to sustain what is an idealist and internationalist strategic culture in the United States has become routinized. This entrenchment of systemic moralism in the American national security apparatus has been facilitated, and is at least partly driven, by a highly competitive professional class vying to secure their position in the system by using virtue signaling to demonstrate class solidarity to their higher ranks. This mimetic mechanism incentivizes pushing the envelope and chasing trending causes (normative mimicry)—but always in service of the imperial needs of the state where expansionism and primacy are viewed as the triumph of a universalized American conception of virtue over those forces which are viewed as being on ‘the wrong side of history’. Under such moralistic conditions, prudence, moderation, and narrower conceptions of interest—provisos of realism—could be effectively vilified as enabling oppression and injustice.

The current Wokeist incarnation of American globalist evangelism seeks not only to change the governments of other nations, but engineer their very cultures according to the Western progressive model. Its universalist framing of human values could be readily applied to violate or undermine the sovereignty of alternate political or cultural systems and justify those interventions for the domestic Western audiences in the name of ‘moral responsibility’.

This white paper seeks to elucidate the often hidden processes and mechanisms that have led to the consolidation of this “woke imperium” of moralistic cosmopolitanism: its historical roots, present day trends, and possible future evolution. It is also intended as a guide for advocates of realism and restraint: to help realists understand the nature of the resistance they are likely to encounter from certain sectors of the foreign policy establishment and their sympathizers as they try to realign U.S. foreign policy goals with more limited and concrete national interests.

Dr. Christopher Mott (@chrisdmott) is a Research Fellow at the Institute for Peace & Diplomacy and a former researcher and desk officer at the U.S. Department of State.

I believe that sexual reassignment therapies and surgeries are obviously an abject violation of the Hippocratic Oath. That entire industry has gone far astray of logic and reason in rationalizing the things they do.

Butchers. Its come full circle. Child sacrifice to the Gods of diversity and inclusion at and industrial scale. Even ancient civilizations that are not longer here by the way, haven't done it like this. On this scale.

It's also a form of sterilization.

Posted by WilyRickWilesMcConnell dumps Donald over choreographed visit with Ye and Fuentes, setting up rise of DeSantis

Posted by WeltansichtA FB 'memeory' from 2 years ago today, got 30 days for it then as well....

Posted by JohnHoukComplacency Will End Liberty SUMMARY: On a world-wide scale, there are people with tyrannical-despotic intent to end Liberty and individual Freedom to be replaced by UNGODLY rule devoid of Biblical...

Posted by WilyRickWilesCalifornia businessmen done with Trump. Like DeSantis. [sacbee.com]