Answer the Call for Liberty - It's Not Dark Yet

This submission by Justin Smith will make big tech censors explode. Why? Smith calls on Americans – If Courts fails to adjudicate criminal Election Fraud – to RESIST a Biden/Harris Dem-Marxist Election by any means necessary. I ask, “Are you Patriot or a Sheeple?” I guess you will act accordingly: /3q6IOKx
#AmericanPatriot #AmericanSheeple #PreserveFoundersRepublic 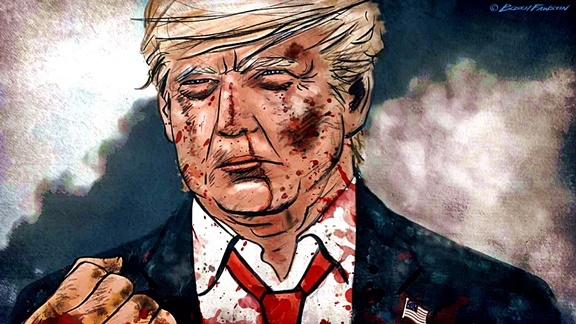 So when the election is certified, and the will of the people is final that Biden is the next president, your recommendation is an armed coup? You honestly think Trump gives a shit about you? The only reason he is fighting so hard to resist the will of the people is because he is the biggest narcissist and cannot admit defeat. He only cares about enwealthening himself at the expense of the American people, and he doesn't care who he hurts in the process. Your image of him looking like some battle-scarred freedom fighter is laughable - the man who dodged the draft with phony bone-spurs, considered unprotected sex his own "personal Vietnam", and thinks the armed forces are full of "losers and suckers". The only correct interpretation of that photo is that he spilled ketchup on himself after trying to put it on his well-done steak.

Posted by GeeMacJoe Biden’s plan to immediately rescind Donald Trump’s travel ban on seven troubled countries is proof positive that “healing” is off the table and that the media continues to pump out fake ...

Posted by 2perosMeanwhile in India...

Posted by 2perosCan’t trust anyone these days..

Posted by Republic7This is a watermelon.

Posted by w0tn0tIlhanOmar - She was her own sister-in-law!!

Posted by w0tn0tRemember when BLM rioters were burning down cities and Colin Kaepernick literally called for more violence? And then instead of banning him, @Jack gave him $3M!!

Posted by CookieMonsterCherry picked comparison can sometimes show what painting people with a broad brush results in.

Posted by NaomiDo you think that those Youtubers, podcast hosts, bloggers, etc.

Posted by RemiDallaireRight now in Canada they are making a big deal for this journalist who wears a Hijad on TV.

Posted by ZuzecaSape The 50 Most Racist TV Shows of All Time [complex.com] I can't believe Amos n' Andy was 33.

Posted by 2perosNothing To See, Move Along... What A Grin!