I have been largely ignoring politics for the last month. I assumed that Joe Biden would have low favorability rates in polls. The evidence that his administration is incompetent seem to be hard to ignore. Every thing from the border crisis to China's new aggressiveness is hard not to notice even if you watch fake news. I just decided to look at a poll out of curiousity and it's kind of shocking how well he is perceived.

Everyone talks about 1984 and how it's mind control that accounts for people's disconnect from reality but I'm starting to think that the problem is the population itself. The world seems to have gone mad. I'm beginning to suspect that the people behind the great reset are not so much masters of an evil plan as victims of the same phenomenon that is effecting the general population. It has all the telltale signs of a moral panic. The educational systems role was perhaps more to prime people for the moral panic than the source. Certainly the social justice system that started on universities sets the parameters but the disease seems to be deeper than that. It's also likely that some people that are unaffected will be taking advantage of it. It would be really hard to tell who is who.

The madness of crowds is thought to be metaphorical. That said synchronicity is everywhere in nature.

Charles Mackay documents a few historical examples in "Memoirs of Extraordinary Popular Delusions and the Madness of Crowds" [gutenberg.org]

What you would expect to find is that people that have not adopted modern paradigms about morality to be the least affected. In other words they would not be subject to the panic in the same way other people are. You could not test this by measuring rationality because that would introduce a bias in the test. Can anyone think of a way to test this hypothesis?

The conclusion I have come to is that we are unlike historical populations who could do nothing about the catastrophes they knew they were about to be part of other than pray.   We feel as if we can meet any challenge due to the tremendous success of the scientific revolution and the industrial revolution.  Success makes us feel responsible.  Instead of praying for our sins to be forgiven we have made doing nothing a sin.

There is of course nothing wrong with feeling responsible.  The problem is that at the same time that we gained control over nature we became naturalistic.  Naturalism was built into the Enlightenment and scientific revolution.  Science taught us that determinism was the only sound epistemological method.  Some would say that you shouldn't confuse empiricism with determinism but that is really splitting hairs.  Up until very recently we lived in the intellectual clock work world of Newton.  Most of the philosophical push back against incompatibilism (the idea that science was incompatible with freewill) has simply been ignored.  Considerable cognitive dissonance results from thinking you are responsible for that which is just the result of a series of causes and effects beyond your control while at the same time being held responsible for your actions.

The pain of the cognitive dissonance is compounded by a series of existential threats some of which previous generations could not even have known existed.   Starting with World War Two people have been trained to think they are individually responsible for the world.  The entire population was told the Japanese and Germans were an existential threat that they must respond to with individual sacrifice.  Everything from rationing to going to war was required.  After the war people wanted to just go back to a normal life but they were told they had to prepare for Armageddon in the way of nuclear war.  Then they were told that to stop a nuclear war they would have to fight in Korea and Vietnam.  At about the same time they were taught that their lifestyle was an existential threat to nature.  That without massive changes habitat destruction and pollution would destroy life on the planet.  There were also by the civil rights movement that they were responsible for an institution older than Western civilization.   They could be made to feel guilty because after all if you can build nuclear weapons and put a man on the moon you have no excuse not to solve every social problem including war, poverty and health care.  The next existential threat we were told we were personally responsible for was Global Warming.  The same reasoning said that Western nations were responsible for poverty and misery in places all around the world they had never heard of.  That led to open border reasoning which proved to stress an already shaky social safety net but it was racist to question why poverty was such a problem outside of capitalist countries.  Capitalism they had been taught was actually the problem despite massive evidence to the contrary.

When you tell people they do not have freewill but that they are responsible for every problem in the world little wonder they go into a moral panic.  The irony is in a moral panic people lose the ability to see causes and effects.  They start to see themselves as responsible for things they had no control over and to see small problems as major issues.  All sense of proportion is lost and priorities are decoupled from reality as are the solutions.

The act of observing changes the thing being observed. Heisenberg wasn't just a character on a tv show folks 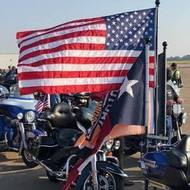 ”I'm starting to think that the problem is the population itself.”

Too many still tune in to the likes of CNN and MSNBC and the other “three networks,” IMO. That does follow the indoctrination in our education system. It is really disheartening when you think about it.

I just decided to look at a poll out of curiousity and it's kind of shocking how well he is perceived.

I doubt polls are reliable of late.

Tucker is about the only show on TV I enjoy these days.

As to the world going mad. It's called gaslighting. We can't get any truth out of our information sources. Nancy Pelosi is a paranoid old maid. But most of the politicians back Obama and I don't believe there is anyone else that could hold that much influence over them. But they are on board with his "fundamental transformation" of America. I'm not sure that the Democratic party knows the full ramifications of the policies that will accomplish that goal or the impact on the vary fabric of the nation.
One thing is certain, change is occurring. The old normal is not desirable to anyone. There was too much degradation and social engineering. But the communists have been working on America for more than a century.
No one would believe they want to kill off about 7 billion people - even most of them. Unfortunately, they are thinking this needs to occur yesterday to save the planet. The problem lies in how it can be achieved without accepting any responsibility for it occurring. A natural event like climate change where we are all responsible might work. Shall we see?

You can't structure a test - because you need society to act and that action is what you have to evaluate. Like any other test, being WITHIN it, invalidates all the observations, at least if you seek objectivity.

People want to have others think well of them - even if they do evil to accomplish it....

Posted by FraggleIt's Sunday and I'm back with another page from my comic: One Big Shoe! If you liked this please show some love, leave a comment, or consider following me at one of these links: [facebook.

Posted by NaomiBest wishes to 'Moustache Cop' (an English cop) who has gone viral on the Twittersphere WATCH | ‘The Moustache Cop’ Signs Off For The Very Last Time In Emotional Video The video has been ...

Posted by Edgework“Every record has been destroyed or falsified, every book rewritten, every picture repainted, every statue, street and building renamed, every date altered.

Posted by dd54I am so tired of marxist SJWs consistently telling anyone that questions or stands in opposition to the epistemology of CRT that they don't know or understand what CRT really is.

Posted by dd54I am so tired of marxist SJWs consistently telling anyone that questions or stands in opposition to the epistemology of CRT that they don't know or understand what CRT really is.

Posted by WilyRickWilesHow to spot a moral panic.

Posted by TragicDogVideoNature vs. Nurture on Tik Tok | Bartleby TDV

Posted by GeeMacThe Greens are supposed to be all about loving Mother Nature, but in Canada the nascent party is being ripped apart in a bitter round of infighting over Israel.

Posted by JohnHoukAmerica: Worth the Sacrifice I believe confronting the current American tyranny should begin with peaceful – YET LOUD – protests and resistance to laws and bureaucratic (unlegislated) rules.

Posted by KrunoslavAin't It the Truth?

Posted by GeeMacThe once-esteemed Ryerson University in Toronto is under a relentless assault by woke-Purtains who are determined to remove all traces of British history from Canada. Is this the beginning of the end?