Washington, How Twitter Helped Biden Win the US Presidency

The short message service Twitter massively influenced the US presidential election campaign two years ago in favor of the then candidate Joe Biden. The then-incumbent Donald Trump ultimately lost the election. Internal e-mails that the new owner, Elon Musk, has now published on the short message service show how censorship worked on Twitter. The 51-year-old called it the “Twitter files”.

It’s about the laptop of Biden’s son Hunter. The background to the criminal machinations of America’s presidential family in Ukraine was hidden on the device. Twitter had blocked all articles about it and even blocked the then White House spokeswoman after she circulated a report on it from the New York Post.

The journalist Matt Taibbi has examined the case. To do this, he looked into the e-mails of the company and discovered how the short message service exercised censorship. It’s a glimpse into a company where management knew they were doing wrong, but persisted nonetheless.

When Hunter Biden brought his laptop to a small computer shop for repairs in 2019 due to water damage, he never picked it up again. It contained explosive files about extremely dubious deals from Joe Biden’s time as Vice President under Barack Obama. The PC shop owner gave the recovered files to the FBI. But when the federal police remained idle for more than a year, he passed them on to Trump attorney Rudy Giuliani, who then gave it to the New York Post, which published the revelation on October 14, 2020, just under three weeks before the presidential election.

“Twitter took extraordinary steps to suppress the story, remove links to it and mark it as ‘unsafe,'” Taibbi said about the affair. The company even prevented users from forwarding the story as a private message. However, this sort of measure is only ever intended for extreme cases such as child pornography.

Even then spokeswoman for the Trump-led White House Kaleigh McEnany was barred from accessing her profile after attempting to tweet the story. This led to Caroline Storm, who was responsible for the Twitter rules at the time, asking internally why McEnany was blocked. Answer: “She violated our rules for using hacked material.”

FBI Warning Was a Lie

According to Taibbi, it was apparently also argued that there had been a general warning from the federal police that the story about Hunter Biden’s computer violated applicable law. But the journalist could not find anything of the sort in the files. The decision had nothing to do with the FBI. It was rather made at the highest level at Twitter – but without the knowledge of then-CEO Jack Dorsey. They simply went ahead on their own, an ex-employee told him.

After the complaint from the Trump campaign manager, chaos broke out in the management floor, as evidenced by several exchanges of e-mails that have been published. Apparently everyone understood that there had been no reason to censor the story. Instead it became a matter of bending the facts in such a way that Biden was the victim of “fake news” and Twitter an ardent campaigner against “false claims”.

The hacking argument served as an excuse for the censorship, but within a few hours it was clear to everyone that this was untenable, the ex-employee said, according to Taibbi. But according to the unnamed informant, no one had the guts to admit it. At that point, everyone knew Twitter was faking the reason for censoring the story and knew they were wrong. But they continued nonetheless.

One executive wrote on the day that Twitter made the decision, in an email now disclosed by Taibbi, “I struggle to understand how the Biden story could have been flagged as ‘uncertain.'”

Then Twitter’s Deputy General Counsel, Jim Baker, intervened and concluded, “The warning is valid.” There were “some facts” to suggest the material was hacked. That is how the die was cast.

Also that same day, Democratic Congressman Ro Khanna wrote to Twitter General Counsel Vijaya Gadde that there would be a “huge backlash” from Republicans against short messaging censorship: “I hope you’re ready for that.” According to Taibbi, this was the only time the Democratic Party got involved in the affair. Nothing more was needed. Because Twitter then did exactly what the Biden campaign wanted it to do. All references to the scandal of today’s US President were rigorously deleted, and users blocked from spreading it.

Musk will continue to publish internal documents on Twitter censorship. He compared his previous disclosures with the publication of the Stasi files in 1990. “We need a more balanced system that is not so left leaning,” Musk said.

“We need to post more original documents going forward, so people can draw their own conclusions. It is evident that there has been widespread censorship, including things that have affected the outcome of elections. It’s like the damn Stasi files. These files simply have to be made known,” Musk said.

“That’s the intent here is to just make it clear what was happening, and provide transparency about the past, and in doing so, to build trust about the future,” he said.

“What has happened on Twitter is that the values of San Francisco have been imposed on the whole world, which is very leftist. That’s problematic,” Musk continued. “In earlier times the influence of a city like San Francisco would have been limited. But now, because of the centralization of social media, it’s affecting the whole world. We need a more balanced system that is not so left-leaning or even left-wing extremist.”

Different political views and freedom of expression are needed, he said.

Hunter Biden with his father and step-mother in 2021 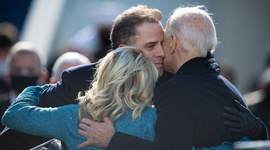 Nothing here is news to those of us who paid attention.

Posted by Sensrhim4hizvewz I am Sorry For My Family's White Privilege Being given all this luxury and comfort and privilege because of our skin color was ... well, just plain wrong!