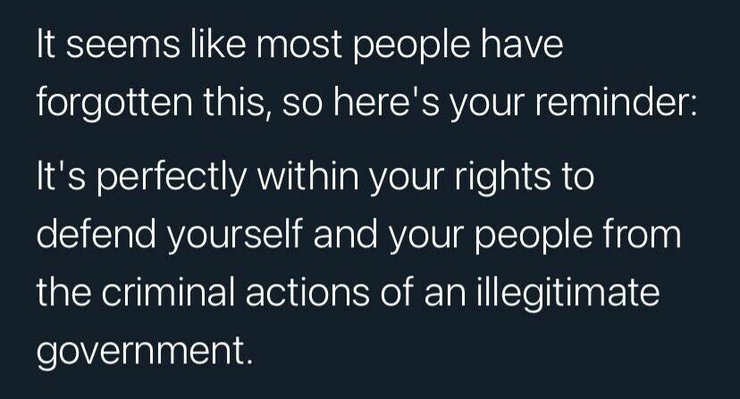 That this right of resistance was recognized as a common law right, when the ancient and genuine trial by jury was in force, is not only proved by nature of the trial itself, but is acknowledged by history.*

Hallam says, “The relation established between a lord and his vassal by the feudal tenure, far from containing principles of any servile and implicit obedience, permitted the compact to be dissolved in case of its violation by either party. This extended as much to the sovereign as to inferior lords. If a vassal was aggrieved, and if justice was denied him, he sent a defiance, that is, a renunciation of fealty to the king, and was entitled to enforce redress at the point of his sword. It then became a contest of strength as between two independent potentates, and was terminated by treaty, advantageous or otherwise, according to the fortune of war. * There remained the original principle, that allegiance depended conditionally upon good treatment, and that an appeal might be lawfully made to arms against an oppressive government. Nor was this, we may be sure, left for extreme necessity, or thought to require a long enduring forbearance. In modern times, a king, compelled by his subjects’ swords to abandon any pretension, would be supposed to have ceased to reign; and the express recognition of such a right as that of insurrection has been justly deemed inconsistent with the majesty of law. But ruder ages had ruder sentiments. Force was necessary to repel force; and men accustomed to see the king’s authority defied by a private riot, were not much shocked when it was resisted in defence of public freedom.” - 3 Middle Ages, 240-2.

That is from an Essay on The Trial by Jury, by Lysander Spooner.

"That the question was not whether, by a declaration of independence, we should make ourselves what we are not; but whether we should declare a fact which already exists:
"That, as to the people or Parliament of England, we had always been independent of them, their restraints on our trade deriving efficacy from our acquiescence only, and not from any rights they possessed of imposing them; and that, so far, our connection had been federal only, and was now dissolved by the commencement of hostilities:
"That, as to the king, we had been bound to him by allegiance, but that this bond was now dissolved by his assent to the late act of Parliament, by which he declares us out of his protection, and by his levying war on us a fact which had long ago proved us out of his protection, it being a certain position in law, that allegiance and protection are reciprocal, the one ceasing when the other is withdrawn:"

That is from the First Congress of The United States of America as it was formed beCAUSE the former fellow defenders decided to become offenders in fact.

"A law enforcement officer will lose his bond if he oppresses a citizen to the point of civil. rebellion when that citizen attempts to obtain redress of grievances (U.S. constitutional 1st so-called amendment).
"When a state, by and through its officials and agents, deprives a citizen of all of his remedies by the due process of law and deprives the citizen of the equal protection of the law, the state commits an act of mixed war against the citizen, and, by its behavior, the state declares war on the citizen. The citizen has the right to recognize this act by the publication of a solemn recognition of mixed war. This writing has the same force as the Declaration of Independence. It invokes the citizen's U.S. constitutional 9th and 10th so-called amend guarantees of the right to create an effective remedy where otherwise none exists."

That is from an obscure Network web page on Boding Code

"In American history, the Declaration of Independence served the legal purpose of making a Solemn Recognition of Mixed War, which is a Notice of Military Lien Right, a warning of No Trespass, an assertion that any killing or taking of human life necessary for the protection of the legal remedies of the common citizen is being done, in the immediate situation described in the Solemn Recognition or Notice, not as murder, but as lethal self-defense of the commercial and social remedy against the cited domestic enemy or enemies. The Declaration of Independence is the legal model or format for the construction of the Solemn Recognition of Mixed War and the Notice of Military Lien Right."

A fool will believe any lie up to the point that the fool is faced with the cold hard facts.