′′ WE are at war, yes!
WE are at war, yes! WE, the non essentials, WE, the useless, WE, the nothing, WE, the lights diving in the shadows, WE, the People of the Spirit and Culture, WE, the restaurateurs, those of mouth pleasures and very short fun, Yes, WE are at war, WE, the show staff and technicians, theaters and cinemas, WE, the cast and comedians put to forced stops, WE, Musicians, ALL of us you consider like sloths but let's only dream of working, And all those of the night, this world that lives at night, that BLACK night that you associate with evil, that medieval fear that accompanies the night when the devil returns, that evil that grows when the sun has set,-now after 20 pm -, this viral evil whose definition changes with your moods, that invisible threat first defined as lethal, but whose danger is now considered in terms of ' case s' ", (hence the suggestion to resort to massive tests to obtain impressive large numbers), with the intention of submitting an increasingly sceptical public opinion to be vaccinated in an emergency, despite the ongoing pressure of media, themselves under watch.

WE, whom you deal with an outrageous detachment, Yes, WE are at war with YOU! Against the Janus who repeats that he ′′ assumes ", he who thinks he's gifted with absolute super power of seduction, which allows him to enchant and foolish everyone he meets, he the Little Prince so condescending to to the people and middle class, yes. We're at war You Against this orphheon of opportunistic sub-fifes who improvise a cacophonic choir on a daily basis, this ribambelle of cynical technocrats feigning to coldly ignore the dramas in which those concerned with these unparalleled decisions, YOU, including Lenifying and versatile speeches combine both ignorance and absurd, Against YOU, whose inconsistencies flood us like acid rain on our forest of dreams, Against your false promises and your announcement effects as a permanent bluff, claiming things one day, and the opposite the next day with the same Trumpist,

Against your inept fanfaronnades and unannounced decisions, Against your laws passed in Catimini, We are at war yes! Against billionaire mafias and other giants of Big Pharma, Against your effective denial of climate threats to capricious consumption and pollution of unnecessary items distributed by the giant Amazon, Waging an economy of cavalry and racing forward who ′′ invents ′′ virtual billions, and takes us in the short term to the great delusion of an unreal economy, like a dive into a bottomless well.

France is not serene, drowned in a kind of chaos and disgusting caused among others by overprotection of a repressive police and intestine disputes between illuminated specialists as unhealthy as street brawls between bands of alcoholic supporters. France is not at peace with itself, when the same ones who denounced the laws of the caliphate imposing silence and veil, yes, the same have been banning in the same way for months both theatre, music, the museums, popular encounters (sporting or artistic), and then restaurants, happy and friendly party gatherings, and now Christmas with family and Silvestre... Aware that the kids in schools are learning to go crazy, yes, We are at war, a secret war, an internal war, yet still in implosion, but whose consequences will be serious. We guess the rumbling anger and desperate people are ready to explode, ready to blow themselves up, suicidal. A power so powerful is only by the people's acceptance or refusal to obey. Now WE are at war, yes, To defend our right to continue living with dignity, To defend our legitimate freedom and our right to think otherwise!" 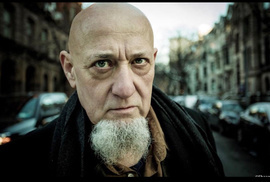 You can include a link to this post in your posts and comments by including the text q:164170