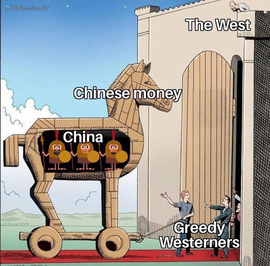 Love the drawing and it's right on the money—if you'll pardon the expression.
Wonder why that Chinese trio have undergone blepharoplasty :0)

The real power in this meme is that it explains the reality while making us chuckle. Fact: Trudeau has invited People's Liberation Army soldiers to "train" in Canada. Fact: Buy-den has opened American businesses to purchase by PLA operated companies. Fact: Mao first declared war on the United States, along with the rest of the world's democratic governed nations, in 1949 and there has never been an armistice. Fact: It is the stated goal of the CCP to dominate the entire world, subjugating the "lesser races" to the rule of the Han. If there is not a parallel between this and the appeasement programs of Nevil Chamberlain, I don't understand anything about history.

You can include a link to this post in your posts and comments by including the text q:187700
Slug does not evaluate or guarantee the accuracy of any content. Read full disclaimer.