Christianity has been a major part of Western culture for the last two thousand years and as a textual based religion it has programmed people to think of the written word as their spiritual datum. For two thousand years, people have been discouraged from filtering their beliefs through the lens of their own life experiences and common sense.

The very popularity of Christianity, until very recently, demonstrates that most people were quite comfortable believing two statements at the same time, both of which were mutually contradictory. For instance, Jesus said he was the son of god but also said that he was not.

The result of these limitations, imposed on literary comprehension, is that people find it very hard to tell the difference between fact or fiction. Neither is it generally possible for people to comprehend statements that express Experiential Divinity, certainly as spoken by the Jesus of History.

Inevitably therefore, when Christians found that they couldn’t understand the teachings of Christ, they felt far more comfortable making up their own words and putting them in the mouth of Jesus. To be fair, these 19th century fraudsters were not the first people to presume to speak for Christ! All of the gospels are examples of pseudepigrapha (falsely attributed work - AKA: Fraudulent). These ‘holy’ frauds became very popular as soon as ordinary people were allowed to read the Bible in their own language. 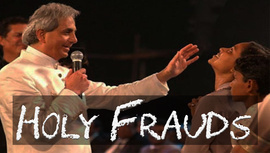 Jesus was just a man like any other. He came from the relationship between Mary and a man. Mary went on to have half dozen more kids. Where did they come from. Joseph who traveled with her was an old man of 45 or more years and had half a dozen kids of his own. It is just a story made up to control people.

Good points. On what are you basing your opinion? Not that we disagree in principal.

@JesusOfHistory i have a large book written by people who study the bible. i was reading about paul yesterday and found out that he was beheaded. paul lived at the time of Nero. i also read holy blood, holy grail. in that historic book they prove that jesus lived to be in his eighties. there is no mystery.

@maryrose I would caution on assuming that a book being big is necessarily a good thing. As far as I know there is no reliable information on Paul beyond his letters. Can you tell me where you get the idea that the Jesus of History lived to old age? What is your reference?

You can include a link to this post in your posts and comments by including the text q:188495
Slug does not evaluate or guarantee the accuracy of any content. Read full disclaimer.