ON THIS DAY IN HISTORY June 10, 1964
Senate Minority Leader Everett Dirksen (R-IL) criticized the Democrat filibuster against 1964 Civil Rights Act and called on Democrats to stop opposing racial equality. The Civil Rights Act of 1964 was introduced and approved by a majority of Republicans in the Senate. The Act was opposed by most southern Democrat senators, several of whom were proud segregationists — one of them being Al Gore Sr.

. President Lyndon B. Johnson relied on Illinois Senator Everett Dirksen, the Republican leader from Illinois, to get the Act passed. 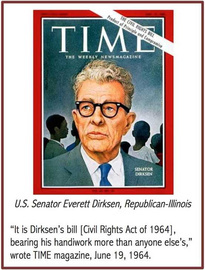 A Republican president abolished slavery and opened the door to radical Republican carpet baggers who moved in and destroyed the economy of the south and encouraged black supremacy. Today Republicans are in favor of equality for all and support the laws that call for it. All races are equal but they better not move into my neighborhood. Economic equity says those who are living off the government are taking money from the responsible, but corporate tax breaks, government contracts, lobbying interests and open doors for the wealthy are ok. They are for fair elections but gerrymander districts, have adequate polling stations in wealthy areas and very few inadequate stations in poor areas, and create rules to make voting more difficult for less advantaged people.

Too bad what happened afterward with Goldwater et al. 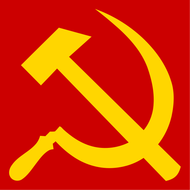 Democrats have opposed racial equality since their founding by Jackson and crew. The foundation of the Republican party was the issue of abolition of slavery and the inclusion of Africans in society.

You can include a link to this post in your posts and comments by including the text q:233629
Slug does not evaluate or guarantee the accuracy of any content. Read full disclaimer.