The Return of the Art Right:

The deep state has a history of funding post-modern art (see Jackson Pollock), and suppressing traditional, baroque, high art. Art, as it’s meant to be, is always destroyed before the final step into communism. History shows that skilled artists and their work tend to be the first eliminated under collectivist dictatorship (see Pol Pot’s Cambodia).

Anything without meaning, especially the post-modern slop of the mentally ill, is upheld as the new norm. Finger-painting behavioral therapy produced in a padded room goes to the front of the line where confused observers are told it is “subjective” and to “create their own meaning” as if this makes it avant-garde and esoteric.

This is not to say that there is no good post-modern art, only that “good” or “bad” are scary oppressive words which the post-modern artist claims to transcend. Just ask the “Trans Artist Who Collected 200 Gallons of Urine to Protest Trump” in 2017 if it’s a “good” work of art.

Traditional art is dedicated to achieving greatness through proper technique, color theory, light theory, and anatomy. Learning these things requires discipline and integrity; things that the post-modern artist is detrimentally short on. There is a noticeable difference between the rule-breakers who master the rules first, and the “artist” who refuses to observe the existence of rules at all.

The well-studied artist paints meaning directly into his canvas with intention, uniting the viewers with similar objective conclusions. The power in this activity makes traditional art a threat to the equality-obsessed communist. The vast dynamics and emotional content of traditional art is counter-productive in the communist’s gray world, fixed on sameness and the erasure of distinguishing features.

The infection of post-modern art has caused the right to largely abandon all artistry in general, and understandably so. The promotion of ugliness, meaninglessness and talentlessness in post-modern art is meant to demoralize and degrade the observer. It’s more beneficial not to observe at all. Traditional art, however, does the opposite and should be embraced by the right as both an intellectual tool for self-betterment as well as a weapon against the increasingly insane left. 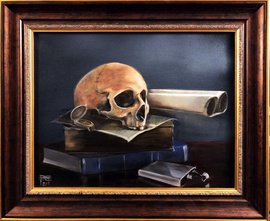 You can include a link to this post in your posts and comments by including the text q:239414