The title of this book might mean anything. Here, it refers to the gathering and dissemination of "news", particularly foreign news. If one is to believe Mr. Riegel, then one can not believe the press dispatches or the radio news that comes from abroad. These are colored and controlled to suit the interested powers. And the masses have to take only such "news" as the authorities want then to have. Oftentimes the news is "tampered with and exploited for the deliberate purpose of warping the human mind" (p.17). The author thinks that had the agencies of communication been limited to cables, a stabilized control, with the Anglo-Saxon countries dominant, might have been maintained. But the radio up-set everything. It has created the existing "chaos." The whole tendency of radio development has been in the direction of rigid control by patriotic politicians. HERE LIES THE REAL DANGER. THE WORLD'S NERVOUS SYSTEM OFFERS A MENACE TO SOCIETY, "because the psychosis from which it suffers is unperceived and unrecognized." Government interference with communication, except in Great Britain and the United States, is growing more severe.

But the control of news broadcasting is not the only danger. The corruption of the stream of news by the forces of nationalism is likewise a menace. Foreign press associations are busy furthering their nationalistic aims. Even the Anglo_saxon nations, which like to think they are free, are not immune from this danger. In ten European countries (presumably he includes Russia), with a total population of over 300,000,000, the authorities dictate absolutely what their people shall read. In six other countries, with a total population of some 60,000,000, active censorship exists, but has not come as far as in the ten other countries. In only ten nations, with a population of some 136,000,000, is there any approach to freedom of the press. Concluding — Mr. Riegel thinks the future is none too bright. Strict censorship in certain foreign countries has already led to an intellectual medievalism. The United States offers the only ray of hope. Bad as conditions are here, there is still the most trustworthy source of news reports, and the freest field of news publication. 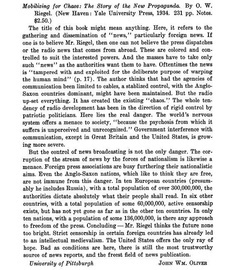 Obviously, the USA can no longer be considered the "only ray of hope", we have GIVEN up that right!!!

You can include a link to this post in your posts and comments by including the text q:172849
Slug does not evaluate or guarantee the accuracy of any content. Read full disclaimer.