Zman had an interesting article today noting that after five months of being in various stages of a lockdown due to the coronavirus hoax, we have not seen any drastic effect on the real life economy. Food, goods and services are still available. We have not seen a food shortage as predicted by the “preppers.” The only shortage we have seen was an initial run of toilet paper. But now even toilet paper is in plentiful supply.

This is somewhat amazing given the massive scope of the economic shutdown. While I did not predict a Mad Max scenario (I made a $1,000 bet on Twitter that I would be able to buy a hamburger in McDonalds by June 1st. Yes, I won the bet) I did predict that we would enter a depression.

So far, the depression has not materialized. People are out of work, but they don’t seem to care as they are getting good unemployment benefits. Other people are working only a few hours a week, but are being paid for 40 hours. This is possible as businesses are being paid by the government to keep their people on staff.

In simple economic terms, this crazy government spending cannot continue. The government is not taking in enough tax money to cover the spending. Currently the government is borrowing the money. Theoretically, this should lead to hyperinflation. But, currently, prices seem somewhat stable to maybe increasing a bit. The apocalypse has not materialized.

But will it continue? The short answer is - no. The longer answer is that, yes, the economy can float along for a bit, but eventually it will collapse. Of course, eventually the Sun will collapse and destroy the Earth. So the question that matters is - how long can we continue before we experience an economic collapse?

The election will help to determine the timing of the collapse. If Biden wins, his administration will make Trump look like a penny-pincher. Except to see a massive increase of spending on education, health care and, the mother of all welfare bombs - reparations.

Tax revenue will never recover as people are conservative in investments during societal unrest. Why spend money on a new business if BLM rioters may burn it down? The lack of investment will increase unemployment and reduce tax revenue.

If Trump wins, we may gain some time, but this victory will not solve the problem. If Trump should win, expect to see the ‘resistance’ (which is composed of the entire establishment) agitate for non-stop riots over the next four years. Trump will respond by trying to appease the BLM crowd by giving them money. It may not be as bad as Biden, but the reckless spending will still continue.

But when will things break? While it is impossible to predict the exact date of the collapse, we can predict how the collapse will proceed.

In most things in life, things tend to slowly deteriorate and then suddenly collapse. We see this in people. An eldery person that is ill tends to slowly deteriorate over the years. And then seemingly suddenly things go bad quickly and death occurs within weeks of the “sudden” illness. I put the world “sudden” in quotes, because the actual cause of death was due to a variety of factors that lasted for years. But these factors were not severe enough to cause immediate visible problems. But at the end, it all seems so sudden.

This pattern also occurs with nations. America was a very rich and powerful nation that was able to implement dangerous policies without an immediate visible price. When the 1965 immigration act was passed, we went for years without seeing our homeland changed dramatically. In 1970, five years after the passage, the average person did not notice any change. America was still a White, Christian country. Yes, maybe there were a few more immigrants, but nothing to worry about. But now in 2020, only a fool could not see the drastic change.

The same will happen economically. We can paper over the problem for a bit. But within a period of just a few weeks, everything will collapse in a dramatic fashion. At this point, there is nothing we can do to avoid the collapse.

My guess is that the collapse will happen by 2026 if Trump is elected and 2024 if Biden is elected. Prepare accordingly.

As a kid in the 70's and a teenager in the mid 80's I always felt like America was a white nation. The only place you really ever saw non-whites was in larger cities. The small city I lived in was 94-95% white. Even a medium city I lived next to was almost 80% white and blacks only lived in certain areas so you rarely saw them. De facto segregation was the rule and things worked out just fine.

But things have drastically changed with the WWII gen die off and now the boomers are starting to expire. Coupled with low white birth rates and white suicide rates whites are declining everywhere and it's showing.

Reparations will likely cause inflation and scarcity too. This will antagonize even those who are politically moderate and left out. 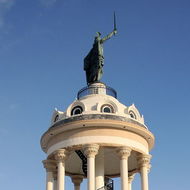 A lot of economic damage has simply been delayed rather than avoided. Things like this take a long time to ripple through the economy when the government is putting economic bandages on everything.

My business may or may not make it. The government in my country has given loans and some subsidies to keep small business going but realistically we are still going to have to pay for a lot of the shut down out of our own pockets and even with things opening back up now, customers are not coming back in nearly the same numbers.

I'm in the process of trying to sell the business now, either I get a buyer and recoup some of my initial investment or I have a large tax write off and won't be paying taxes for the next few years (not great for a government which has added record amount of debt to it's balance sheet.)

Even though the worst of the economic damage hasn't materialized now, it is coming.

Link to to his blog here.
[thezman.com]