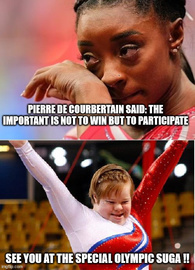 Simone should be set down in a room and required to watch this video for 6 hours straight and then write an essay about the sacrifice others have made to participate in the games.

I have no idea why this is even a point of discussion. If she sprains her ankle or knee and can't go, then everyone would be like, "Oh, damn; that's a shame." But if she pulls out because mentally or emotionally she's having issues, we're all like, "How dare she! She quit on the U.S. She's an example of how soft people are! She dishonors the uniform!"

I'm not defending her; I'm not deriding her, and I really don't get why everyone's got their undies in a bunch over either praising her or condemning her. FFS, do we not have enough shit going on that this is what we're going to obsess over this week? You care THAT much about the Olympics, much less female gymnastics? Your life is THAT impacted by something you wouldn't even have known about if it wasn't making the rounds on social media?

And most of all, it's this idea that people who've come up short PLENTY of times in their own lives are pissed that she wilted in this particular big moment, even though she's already succeeded in the limelight more times than they ever have. You want to get your back hairs up, go after the people who are praising the idea of not pushing through as brave and stunning; they're the ones you're really pissed at, not her.

Its all part of the bread and circuses strategy ginned up and served to the people by the propaganda media cartel and social media bots to keep the populace fed their daily dose of inanities
so they don't think about the critical issues we face today.

there are a couple saddening things to think about....

there is a different gymnast that didnt get to compete.

biles says her own mental health is in question,
so the world turns the magnification on her and starts using her charicter as the tug of war rope to push other agendas

Mehhhhhhhhhhhhhhhhhh..... Pierre de Coubertain...Ever hear of him ? The founder of the mondern Olympics.. Main and big moto....The important is to participate...Not to win.... Did she participate ??
Nope...Did she take the spot of another ? Yes...Did she get a free trip to Japan ? Yup....Did she get a medal ? yes....She"s a heros...bouaaaahahahahaha For her color....And her gender...

@RemiDallaire remi, ive had it for a bit, but i tire of talking heads, safe in wherever they broadcast from, crucifying and martyring people...

it is a non story, and encouraging an enmass tidal vortex of attention onto a person not necessarily wanting to spend days held up in the pulpits.

i think i was aluding to the too easy talking point around a black life by insinuating she is being used as a fulcrum to push narative, a ragdoll torn apart even to denounce, not only to support.

sometimes out intense focus leads to a very narrow and ridgid view, as sharp a needle as a vaccine.

@CuriousFury I don't get you... I'm just clear and simple in my opinion as to why it matters. The Greek invented the Olympics, The idea was retaken for the modern time...It has a decorum.. It has an honor... Don't give anything to the clown world... Or everything is lost... When you have reached te honor to be an Olympian, It has to mean something.. That's it that's all, It's what I think.... It's how I have been raised.

@RemiDallaire i understand your opinion and respect the ideology you are expressing,

i just am not sure how much precompetition media grooming the antient athletes had to hold up, and why do we place these athletes in the roll of atlas holding up the world, or our countries honor, when it is an individuals performance more often than not that dictates a medal?

does a countries honor and virility hinge one one athlete?

David vs goliath to aswage a battle?

this will just be another talkingpoint for the ages, like tanya harding, i guess.

@RemiDallaire i did not realize that she made this as a political statement. i believe we are imparting politics onto it.

and that is my problem. simone biles, ragdoll faught over by two childish polorizations.

when i saw the headline, i thought,'dang, i had hopes for her.' and i guess i am not the only one, but i didnt have money riding on her like her sponsers.

@CuriousFury To represent your country you would have to perform...Which is a thing she did not do.. And got a virtual medal for it...Because mehhhhhhhhhhh feelings and vagina... Got it ? It not going to go higher than that.

@CuriousFury i don't have a dime in this... I 'm just saying... she doesn't deserve a medal virtual or not...And EVERY fucking athletes in the world will agree with that. The politic that got PUSHED into this is the clown world... Bile doesn't owe anyone anything...But we don't owe her ANYTHING back...So there you go. She took the spot of someone else so she could have her cake and the cake of someone else too.

@RemiDallaire ok, so we ARE both on the same page on this...we just say it different.

@RemiDallaire i just straddle the line a bit more than you....an employer would be mad if an employee quit there job out of the blue, but would be just as mad having to hold that job open for a person because of extended absense protected by ada.

one group of people would be thankful the person quit. one side woyld glorify the person taking absense.

again, the sponsers need the gold, so virtual or not, and they can sell just as many ads talking about her quiting(probably more) than if she had competed.

i don't really think she is calling the shots on this.

@RemiDallaire the only thing to get about me is that i am here for conversation and i don't really talk team. i kinda stand in that grey area where individualism flourishes.

@CuriousFury Sure ...What ever man. Works and Olympics are not really the same thing. but ok

Head-shrinkers must think they've died and gone to heaven, with so many praising people for quitting and seeking therapy.