America's wisest Republican, America's best reincarnation of the Founding Fathers, is Newt Gingrich.
Gingrich wrote an entire book about Trump, titled "Understanding Trump". Gingrich gave a series of 6 lectures at the Heritage Foundation on the theme of understanding Trump (on youtube)

Gingrich's book was well received by the Trump family. The Trump family gave Gingrich a bundle of Trump family photos for Gingrich to use in his book. The forward for the book is written by Don Trump Jr. This give legitimacy to Gingrich's title "Understanding Trump".

Gingrich said: "Trump is a political genius. Trump solved problems that I didn't think could be solved".

This is coming from the Great Modern Republican Problem Solver, the Great Republican that wrestled The House away from the Democrats and became its Speaker. It's like Chuck Norris saying something can't be done and then Trump does it.

Democrats thought it impossible to build a skating rink in Central park. They tried and failed. They were over budget and behind schedule. Then Trump did it. Under budget and ahead of schedule.

Trump is complex and Trump is intelligent, so much so that Trump is worthy of a Gingrich book and 6 Gingrich lectures.

The tome "Understanding Biden" fits on a postage stamp. 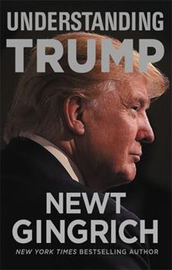 Is that the same Newt Gingrich who cheated on his first wife, and then served her divorce papers in the hospital after she just had surgery for cancer? Who, while trying to run for president, told people his first wife was "not young enough or pretty enough to be the wife of the president...and besides, she has cancer"?

Is that the same Newt Gingrich who was cheating on his second wife with a House staffer, while at the same time leading the impeachment of Bill Clinton for having an affair? Who then served her divorce papers after she was diagnosed with multiple sclerosis?

The same Newt Gingrich who thinks nine-year-olds should be school janitors to pay for lunch?

DJT has many faults, and is far from the exalted statesmen his supporters claim. Nevertheless, he is a far batter champion of liberty and democracy than anyone currently supported by the Dems.
The Democratic party needs to put their support behind someone like Tulsi Gabbard.

While I completely disagree with you on Trump being a "champion of liberty and democracy", it is at least refreshing to see a Trump supporter recognize he is a flawed human. These days it seems like Trump supporters are at the level of North Koreans, worshipping him as an infallible god. Just look at Liz Cheney, who voted for Trump and publicly supported his policies constantly, yet got "canceled" by the GOP for merely stating that the election wasn't stolen.

Thanks for the post @jaymaron. Are the 6 lectures recent, or were they made over several years? The newest one I found was from two yrs ago (43:04 min).

I was trying to find the series as well. Lots of Newt Gingrich but not specifically this lecture series. Would love to listen to it.

Eye of the newt ginrich

Even at his advanced age, Gingrich is always looking for a way to make money.