How do you sacrifice children? 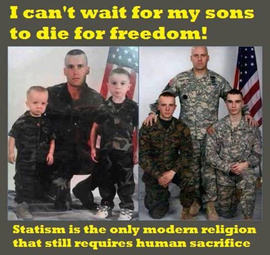 Any reasonable idea can be counterfeiting so as to create an opposing force.

A defensive force intending to deter aggression and sufficiently powerful to reasonably reach that intended goal is ONE example.

Many reasonable ideas have been overpowered by counterfeit versions of the original, grass-roots, organic, defensive, moral, right, good, idea.

The mere fact that this would be news to anyone suggests that there is a very basic idea that has been counterfeited.

REASON is a MEANS to ACCURATELY ACCOUNT for the facts that matter in any case of REASON being overpowered by counterfeit copies of REASON.

Deliberation among individuals who share the agreement to use reason to discover facts that matter in any case of controversy, can reasonably be counterfeited, and instead of deliberating individuals are using deception, threat of aggression, and aggression to overpower each other's capacity for reason, and this counterfeiting is reasoned out as a reasonable thing to do to someone, by someone, or to some group of people, by another group of people.

"In June of 1775, George Washington was appointed Major General and elected by Congress to be commander in chief of the American revolutionary forces. Although he took up his tasks energetically, Washington accomplished nothing militarily for the remainder of the year and more, nor did he try. His only campaign in 1775 was internal rather than external; it was directed against the American army as he found it, and was designed to extirpate the spirit of liberty pervading this unusually individualistic and democratic army of militiamen. In short, Washington set out to transform a people's army, uniquely suited for a libertarian revolution, into another orthodox and despotically ruled statist force after the familiar European model.

"His primary aim was to crush the individualistic and democratic spirit of the American forces. For one thing, the officers of the militia were elected by their own men, and the discipline of repeated elections kept the officers from forming an aristocratic ruling caste typical of European armies of the period. The officers often drew little more pay than their men, and there were no hierarchical distinctions of rank imposed between officers and men. As a consequence, officers could not enforce their wills coercively on the soldiery. This New England equality horrified Washington's conservative and highly aristocratic soul.

"To introduce a hierarchy of ruling caste, Washington insisted on distinctive decorations of dress in accordance with minute gradations of rank. As one observer phrased it: "New lords, new laws. … The strictest government is taking place, and great distinction is made between officers and soldier. Everyone is made to know his place and keep it." Despite the great expense involved, he also tried to stamp out individuality in the army by forcing uniforms upon them; but the scarcity of cloth made this plan unfeasible.

"At least as important as distinctions in decoration was the introduction of extensive inequality in pay. Led by Washington and the other aristocratic southern delegates, and over the objections of Massachusetts, the Congress insisted on fixing a pay scale for generals and other officers considerably higher than that of the rank and file.

"In addition to imposing a web of hierarchy on the Continental Army, Washington crushed liberty within by replacing individual responsibility by iron despotism and coercion. Severe and brutal punishments were imposed upon those soldiers whose sense of altruism failed to override their instinct for self-preservation. Furloughs were curtailed and girlfriends of soldiers were expelled from camp; above all, lengthy floggings were introduced for all practices that Washington considered esthetically or morally offensive. He even had the temerity to urge Congress to raise the maximum number of strikes of the lash from 39 to the enormous number of 500; fortunately, Congress refused.

"In a few short months, Washington had succeeded in extirpating a zealous, happy, individualistic people's army, and transforming it into yet another statist army, filled with bored, resentful, and even mutinous soldiery. The only thing he could not do was force the troops to continue in camp after their terms of enlistment were up at the end of the year, and by now the soldiers were longing for home. In addition to all other factors, Americans were not geared — nor should they have been — for a lengthy conflict of position and attrition; they were not professional soldiers, and they were needed at their homes and jobs and on their farms. Had they been a frankly guerrilla army, there would have been no conflict between these roles.

"As the end of 1775 drew near, then, Washington's main preoccupation was in forging a new army to replace the 17,000 men whose terms of enlistment were about to expire. His problems were aggravated by Congress's refusal to pay the bounties for enlistment New Englanders were used to receiving; instead caste distinctions were widened even further by raising officers' pay, while privates' pay remained the same. Only 3,500 of the old army agreed to reenlist; for the rest, very short-term enlistments of Massachusetts and New Hampshire men filled the gap until new enlistees finally swelled the total to about 10,000.

"As might have been expected, the wealthy and aristocratic Washington, free from money worries, had little understanding of the economic plight of his soldiery. In contrast to the legends about his compassion, Washington railed about the defecting troops as being possessed of a "dirty mercenary spirit" and of "basely deserting the cause of their country."1

"A particularly colorful addition to the New England troops in the Continental Army, during the summer of 1775, was a detachment of nine enlisted companies of expert riflemen from the back-country frontier of Pennsylvania, Maryland, and Virginia, five of them from Pennsylvania. There were over 1,400 of these riflemen in all. The bulk of them were hardy Ulster Scot frontiersmen, wearing hunting outfits bearing the motto Liberty or Death and employing the unique "Kentucky rifle," invented by Pennsylvania German gunsmiths. This long-barreled rifle was uniquely suited for guerrilla warfare. It shot more accurately and over a far longer range than the shorter musket in general use, but it did not reload rapidly, and hence was not useful for orthodox, open-field, positional or linear volley warfare.

"It is not surprising that these backwoodsmen proved even more individualistic and less tolerant of coercion than the New Englanders. When they terrorized British sentries with their sniping, Washington forbade such seemingly disorganized practice which spent ammunition. Whenever a rifleman was imprisoned for infringing one of Washington's arbitrary but cherished rules, his comrades would break into the prison and set him free. On one occasion, virtually an entire Pennsylvania company mutinied to try to free one of their own, and several regiments were needed to disarm and convict the Pennsylvanians, whose penalty consisted of less than a week's pay. The riflemen, however, were not so much unfit for any military service as they were "by nature and by experience, totally unfitted for inactive life in camp." When the opportunity came for action for which they were suited, they were to serve admirably."
Conceived in Liberty, Murray Rothbard

The evidence is more than a sound bite, it does not reasonably enter a human mind through subconscious paths, the individual sharing the need to accurately account for the facts that matter in the case is duty bound to actually find reasonable means to discover those facts, including the reasonable means knowable as deliberation.

What is the law?

One would be duty bound to read the evidence before one deliberately deliberates the merits of the evidence, or one might instead simply jerk their knee.

Sound bite:
"The news of this Desertion filled the City with tumult and confusion;
Those who Wished well to the army, made all the attempts they could
to Scale the Walls to join it, for the gates were shut by the Senates
order. The fathers who had Sons among the mutineers. Reproached
their Degeneracy; Wives Lamented the absence of their husbands and
all apprehended a Civil war."