We rely on members to let us know when posts contain content that violiate the community guidelines. The most common reason that content gets flagged is that it contains dehumanizing or trolling/baiting text. Getting too many flagged posts will result in account termination.
Visit Group Join Group
0 1

At a Pennsylvania State Hearing, widespread voter and election fraud is reported by witness testimony. All one (anyone) would have to do to validate the facts in the case is for one (anyone) to return to rule of law, the common law, and then place the evidence to the jurors along the way. The first step is to take the evidence to a grand jury member or anyone who can assemble a grand jury as warranted by the clear and present dangers associated with a criminal take-over of the DEFENSIVE government, meaning the actual government, which is categorically not a Corporation put in place to serve the exclusive desires of the members of the Corporation at the expense of the victims who are fooled into funding the Corporation instead of funding the DEFENSIVE government.

I have sufficient evidence to prove my case here, with primary sources and applied common sense, logic, reason, thought, and internal moral conscience.

Walkthrough with this along with me, if you dare to use your own lawful power as a human being on the Planet Earth.

The first member of the common law contacted by any one with evidence of voter fraud, election fraud, or any serious crime against all the people that make up The Public, which is all the people, which leaves no exceptions, all the people means all the people, all the people does not mean a few people who are exceptional, which means no confidence schemes, con games, frauds, involving Divine Right of Kings, or “Elite” prerogatives, or Special Interests with extraordinary immunities from prosecution – the first member contacted at law – is duty-bound to employ the evidence communicated from the witness to the first contacted member of the common law, and the next step is clearly the step that forms an independent grand jury.

“No person shall be held to answer for a capital, or otherwise infamous crime, unless on a presentment or indictment of a Grand Jury, except in cases arising in the land or naval forces, or in the militia, when in actual service in time of war or public danger; nor shall any person be subject for the same offense to be twice put in jeopardy of life or limb; nor shall be compelled in any criminal case to be a witness against himself, nor be deprived of life, liberty, or property, without due process of law; nor shall private property be taken for public use without just compensation.” Bill of Rights Amendment Five, 1789

That informs anyone who cares to know the data required to move from one step to the next step at law.

The crime in question is – by self-evident, in your face, fact – an infamous crime, to defraud The People in order to take over the government, to then make the government a criminal operation instead of a defensive operation.

Any more evidence needed? No. But how about this:

“In all criminal prosecutions, the accused shall enjoy the right to a speedy and public trial, by an impartial jury of the State and district wherein the crime shall have been committed, which district shall have been previously ascertained by law, and to be informed of the nature and cause of the accusation; to be confronted with the witnesses against him; to have compulsory process for obtaining witnesses in his favor, and to have the assistance of counsel for his defense” Bill of Rights Amendment Six, 1789

The history (precedent) of the common law, as the law of the land, goes back to Ancient Times, and that is why the common law has also been called The Ancient Law. Why the fuck would The Bill of Rights still be on the books if there was no reason, no logic, no CAUSE to leave those words in those Statutes, those books that report information documenting the law process?

An independent grand jury and a trial jury, as well as a witness of an infamous crime, are all NON GOVERNMENT people, all part of The People, all part of The Public, as in We the People, and the reasoning for having ONLY independent people (not government employees) on grand or trial juries – the logic behind doing so – is to minimize (within the limits of the natural laws government people) bias that would favor the criminal instead of bias favoring the victim i.e. DEFENSIVE government.

No answer? Think about it. If the only one left to tell the truth is the victim, then what the fuck is the government in place, taking in all that loot, good for?

What happens if the victim is too stupid to even know that the victim has been the victim of a fraud?

No answer? Think about it. The victim would report: “Both voting by mail and voting in person have a long history of trustworthiness in the US. Voter fraud is extremely rare across voting methods.”

So how does one, anyone, anywhere, ever find out if the one publishing that lie above is just another fool, or one of the criminals?

No answer? How about a whitewash hearing, so as to inform everyone who wants to know that yes, there is systemic voter and election fraud, but no one is going to do a damn thing about it, so pay your fucking extortion fee, and by the way, you don’t have a job anymore. 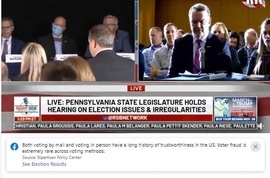