The level of brainwashing or mind control, or spirit control, or body control, or behavior control is demonstrably on a sub-conscious level and it runs very deep.

Even the words used today confess the deep measure of the abyss.

The word Law is opposite the meaning of the original un-counterfeited meaning.

An edict, for example, is a command uttered by a despotic ruler ruling by criminal means. Therefore an edict, if words mean anything, is a criminal order.

In codes, such as, for example, The Uniform Code of Military Justice, there is a message that reads:

"18. sua sponte " means that the person involved acts on that person's initiative, without the need for a request, motion, or application.”

How well are Military Personnel trained to initiate action on their own individual initiative?

“On March 16th 1968, Chief Warrant Officer Hugh Thomson, Jr. was piloting a Scout helicopter providing air support for ground elements engaged in combat around two hamlets of Son My Village, Quang Ngai Province, Republic of Vietnam. While reconnoitering the village, Thomson and his flight crew noticed large numbers of bodies- infants, young children, women and very old men. None of the bodies appeared to carry weapons; none of the bodies appeared to be of "draft-age" men.

“Thomson landed his helicopter to investigate. He and his crew discovered the U.S. soldiers were shooting unarmed villagers. As Thomson questioned the troops he was told they were "just following orders." Thomson then began to coordinate airlifting villagers to safety. He personally had to place himself, and his helicopter between soldiers and villagers to ensure their protection. He also had to tell his crew that if U.S. soldiers made further aggressive actions against the remaining villagers, then his crew was to open fire upon the U.S. soldiers. Thomson and his crew made approximately three airlifts rescuing at least ten villagers. They are credited of having stopped the My Lai Massacre.”

“A person who is found guilty of attempted mutiny, mutiny, sedition or failure to suppress or report a mutiny or sedition shall be punished by death or such other punishment as a court-martial may direct.”

Within codes that attempt to inform individuals their lawful duties, it could be clear to individuals that the laws governing human beings are internal, not external. External messages received by individuals must be processed internally by individuals as to the true nature of those messages, even when those messages are forming before an individual’s eyes as actions perpetrated by criminals who are actively in the process of injuring innocent people with obvious malice.

This is not news, and if “Schools” were ever to be institutionalized for lawful purposes, then students would be taught these messages for their own good, and for the good of everyone that constitutes lawful society, also known as civilization, also referred to as The People.

Example:
“Pilate was not innocent because he washed his hands, and said, He would have nothing to do with the blood of that just one. There are faults of omission as well as commission. When you are legally called to try such a cause, if you shall shuffle out yourself, and thereby persons perhaps less conscientious happen to be made use of, and so a villain escapes justice, or an innocent man is ruined, by a prepossessed or negligent verdict; can you think yourself in such a case wholly blameless? Qui non prohibet cum potest, jubet: That man abets an evil, who prevents it not, when it is in his power. Nec caret scrupulo sosietatis occultae qui evidenter facinori definit obviare: nor can he escape the suspicion of being a secret accomplice, who evidently declines the prevention of an atrocious crime.”
Englishman’s Right
A DIALOGUE BETWEEN A BARRISTER at LAW AND A JURYMAN
Printed in the Year MDCCLXIII. (1762)

“Therefore all things whatsoever ye would that men should do to you, do ye even so to them: for this is the law and the prophets.”
Matthew 7:12

That is a law because that is the forces governing people as people interact with other people naturally.

A crime is therefore:

All things that you do to other people which are things you would defend against is a crime according to laws that govern people.

Eye for an eye, if carried forward results in The People blinded by criminals counterfeiting the law.

Example:
“The validity of the public debt of the United States, authorized by law, including debts incurred for payment of pensions and bounties for services in suppressing insurrection or rebellion, shall not be questioned. But neither the United States nor any State shall assume or pay any debt or obligation incurred in aid of insurrection or rebellion against the United States, or any claim for the loss or emancipation of any slave; but all such debts, obligations and claims shall be held illegal and void.”
XIV - Citizen rights not to be abridged
Passed by Congress June 13, 1866. Ratified July 9, 1868

An individual can be so brainwashed as to read the above EDICT as if that criminal order was something other than a confession published by specific criminals whose inculpatory paper trail leads directly to them factually: caught red handed in a criminal act.

But the slaves are taught to obey without question, and therefore the slaves follow orders no matter how malicious, torturous, horrifying, terrifying, or treasonous those orders are in fact.

The slaves are told to pounce on anyone who dares to question the fact that the slaves are enslaved by their apathy, their unfortunate exposure to a constant stream of falsehood formed with the purpose of enslaving people, and their blind belief in falsehood without question.

This is not news. 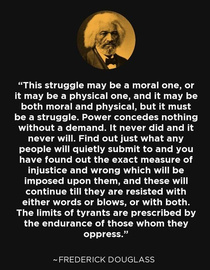 Fred Doug was an American original.