We rely on members to let us know when posts contain content that violiate the community guidelines. The most common reason that content gets flagged is that it contains dehumanizing or trolling/baiting text. Getting too many flagged posts will result in account termination.
Visit Group Join Group
1 1

That is all for lack of intelligence and moral conscience.

When the criminals take-over government, it is the duty of the people to - at least - acknowledge that fact.

Many do so, at least.

No one knows what next?

"It should also be noted that the original common law writs of quo warranto were demands on the party claiming authority, the respondent, who had the burden of proof, not petitions for relief from the court, other than declaratory., with the burden of proof on the petitioner."
[constitution.org]

If Treasonous Frauds prove by confession that they themselves are, in fact, Treasonous Frauds, then they would, by their willful actions, and with malice aforethought, prevent the acceptance of a valid writ of quo warranto.

That is as factual as any other grass-roots, organic, bottom-up, common law, defensive cause to act in defense, which is a cause to act in a Court of Law, as any other, not limited to anything The State may do to victims of The State, and that is based upon sound moral principle, and codified law dating back to the time of Jesus, documented as such, in Mathew: 7:12.

If those in authority claim to have authority at law, documented according to their claims in The Amended Constitution of The United States of America, then they are never-the-less liable to due process of law, even as they assume Lawful Authority.

They, those assuming Lawful Authority, NEVER get to do unto others that which they themselves would defend against were others to dare to do the same to them.

"...shall nevertheless be liable and subject to indictment, trial, judgement and punishment, according to law."
[avalon.law.yale.edu]

"No person shall be held to answer for a capital, or otherwise infamous crime, unless on a presentment or indictment of a Grand Jury,..."
[avalon.law.yale.edu]

That leaves a writ of quo warranto.

Where is that writ of quo warranto, since we are demonstrably at this point?

After quo warranto is refused, on any grounds fabricated out of thin air, since it certainly cannot be refused on lawful, factual, grounds, the guilty, having refused to even acknowledge the writ, let alone provide the evidence confirming their authority at law, the remaining step is a Solemn Notice of Mixed War.

If none of those steps are taken, then whoever jumps right into offensive, aggressive, riotous, war, is also a treasonous criminal, a puppet attached to the puppet masters, a slave incited into harming innocent people, typically lured into action by some nebulous reward after the employee finishes the job, as judged exclusively by the employer.

What would be the response by the Treasonous Criminals, if in every city, every county, every state, from sea to shinning sea, all defenders had on record their signatures on both writs of quo warranto, refused as documented, and their own Solemn Notices of Mixed War?

I'll tell you, not because anyone asks, but because the situation warrants defensive discovery, deliberation, and publication of those deliberate efforts to defend against Treasonous Frauds.

The Treasonous Frauds in the face of grass-roots, organic, lawful, defensive actions, such as every defender in every city, in every county, in every state, from sea to shinning sea, all signing both quo warranto, refused as documented, and Solemn Notices of Mixed War, all documented complete with signatures and, perhaps, witnessed by at least one other who also signs the documents, and perhaps, affirmed on affidavits according to custom, then...

Why can't you see the inevitable?

The Rats in power would be turning each other in, making deals, to avoid the noose.

An infantile state is a terrible thing to waste, and psychopaths know this fact, it matters to them, it is their opportunity to exterminate mankind.

Let that be not simply a warning, it is a map. 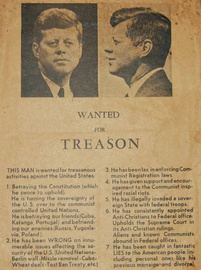 JFK was alright. Joe Biden, on the other hand...