That is a complex process viewed simplistically in two directions that appear, in simple form, to be opposites.

The subject matter is a source of significant power and therefore the source of much human activity in any direction.

The word capitalism, for example, has meant, can mean, and may mean a transfer of power from each individual done voluntarily in free markets.

That last arrangement of symbols is a simple message intending to convey a complex process, it is a map of a terrain in that regard, it is only a map, a powerless map, while the terrain mapped out on the map is powerful.

The power found on the terrain mapped out with the simple map simplifying ONE meaning of the word capitalism includes the power of creativity, adaptability, productivity, specialization, division of labor, economies of scale, and this power is said to lift all boats like the rising tide. This power is a collective power when the sum total of all the individual powers are added together by simple math. This power forces people to demand and supply the next highest quality and the next lowest cost products and services that are within the capacity of human productivity, and the bar that was set by human productivity 100 years ago is no longer the same limited power. This power being mapped out with these words is limited by time and space and human imagination.

The word socialism, for another example, means the same exact thing as the word capitalism above, the only difference between the maps is the diversity of the people reading the map and using the map to travel the terrain mapped out on the map, and some of those people are psychopaths.

Some of the most powerful psychopaths have grown so powerful as to ensure that the rest of mankind are beat down into a form of inhuman life known as sociopaths, and worse: sycophants.

Where capitalism and socialism are the same maps mapping out the same terrain, used by different people seeing things differently, in two distinct groups of people, there are, in that human condition, opportunity to deceive each member of each group, and to cause each to fear each other, to cause each to cut each other’s throats, and the means by which this new terrain is mapped out is simple yet so complex, as to defy, almost entirely, a useful map.

Do unto others as you would have others do unto you.

That is a useful map that maps out the voluntary association terrain that is the power of human prosperity mapped out in both capitalism and socialism for those who use that useful map.

Do unto others that which you would defend against were others to do the same to you.

That is the power behind the psychopaths as those inhuman beings create and maintain a terrain that moves in the opposite direction of the great productive powers of human voluntary association.

Does the map work?

Sycophants have a choice to use any map in any direction, but they choose the false version of both capitalism and socialism, and they do so because they are told to do so, and they are too stupid, or too servile to ever question those criminal orders.

I have questioned and the evidence is clearly proven as described above in no uncertain terms. Every bit of information I have found so far proves what is described above, and none of the information I have found so far disproves the facts mapped out above. I thought, as a started this journey, that I could find an opposing view, to dispel the Golden Rule Map. There are no methods, means, evidences, receipts, histories, documentations, records, to dispel the fact that the Golden Rule works as advertised.

If you think I have not done my homework sufficient to find the evidence to dispel these facts mapped out above, then from what data set have you digested for you to arrive at that erudite conclusion?

Psychopaths, if I am not mistaken, view anyone on the voluntary terrain, mapped out with the Golden Rule, as sheep ripe for slaughter.

Sociopaths, if I am not mistaken, are indistinguishable from psychopaths externally, while internally the power of moral conscience may still disturb the peace of the sociopath.

Sycophants, if I am not mistaken, are too lazy, too apathetic, too stupid, and too servile to do anything other than what they are told, doing so without question.

So, where is this evidence that proves what I show above to be false, or is the world now filled with only the above 3 groups of people working the same terrain with the same criminal map?

No, there is one left on the right terrain using the right map, perhaps two, maybe more. 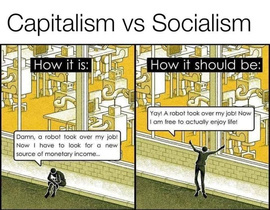 If a robot steals your job, you can make money on OnlyFans.